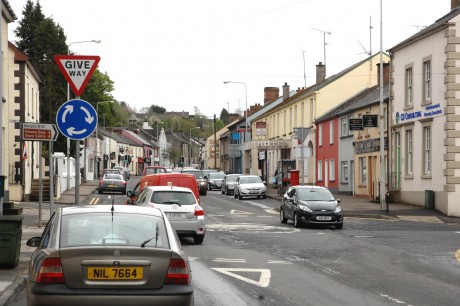 MAIN Street Lisnaskea will be partially closed for two weekends later this month, to facilitate much-needed flood alleviation works.
Last week the Herald reported that work to prevent homes in the town, specifically in The Acres and nearby areas, from flooding during heavy rain was due to begin. The Department for Infrastructure Rivers section has now confirmed that work has started.
The Department has said “to ensure the safety of road users and contractors” during the work, which is the final stage of a £350,000 flood alleviation project for the neighbourhood, some road closures were expected to facilitate the replacement of a culvert on the Main Street.
At the moment, and subject to weather conditions, the street will be closed from 6pm on Saturday, May 19th until 6am on Monday, May 21.
There are also plans for a second weekend closure, from 6pm on Saturday, May 26th until 6am on Monday, May 28th. The Department said that, at present, it was unsure if this second weekend will be required, depending on the progress made on the first weekend.
“The works have been carefully programmed to minimise any inconvenience to the public,” said a Department spokesman. “However, motorists should expect delays and additional time should be allowed when planning any journeys.”
The flood alleviation works come three years after homes and businesses in the area were badly flooded during the heavy rains of December 2015. It is understood the delay was a result of the complicated logistics involved in the work, including liaising with landowners and utility companies.
The works will involve the replacement of the culvert, which had previously collapsed and was not carrying water away in times of heavy rain, and the laying of 80 metres of new concrete pipes.
For more information on the planned road closures visit www.trafficwatchni.com.