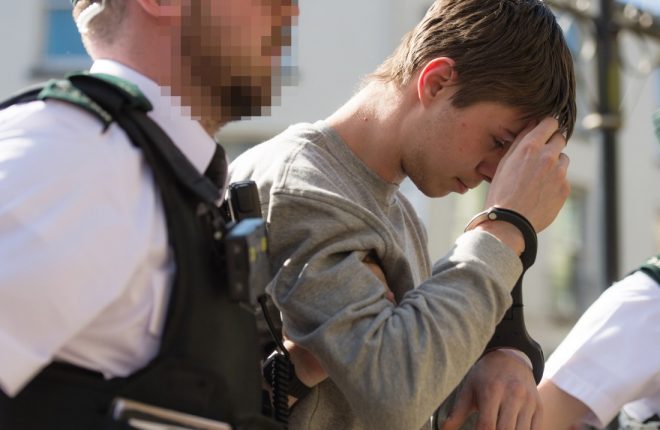 A MAN who was dropped a baby 23 feet from a second-floor window when he was drunk, causing the child serious head injuries, has been jailed.
Timuras Kozlov (21) of Derrychara Drive, Enniskillen was drunk and had no previous experience of children when he was left looking after the six-month-old child on May 6.
Dungannon Crown Court heard he contended he had been ‘presented with a situation’ of looking after the baby and its sibling, while socialising at the children’s mothers home on May 6 last year. He had been left with the children when his cousin went to the bedroom with the mother.
He had never looked after a child and was unsure what to do when the baby began crying. He picked it up in his arms and walked to the window. The other child ‘distracted’ him and the baby moved. He lost his grip and the baby fell through the open window.
Kozlov ran down the stairs into the street, retrieved the baby and handed it over to the mother. The baby was rushed to South West Acute Hospital, then transferred to the Royal Victoria Hospital, Belfast.
The court heard Kozlov failed to inform its mother of what had happened after the fall. Hospital staff were then also misled as to the cause of the baby’s injuries, which included a fractured skull.
The baby sustained a fractured skull and was considered very seriously ill for a time.
Prosecution counsel Jackie Orr QC said it was ‘miraculous’ the baby did not sustain even more serious injuries than occurred. She said a paediatric consultant had confirmed the baby had since recovered extremely well and there is no lasting damage.
When interviewed by police, Kozlov accepted dropping the baby but maintained this was accidental. Intially charged with attempted murder, he has been in custody since May 6 last year. This was downgraded to greivous bodily harm, which Kozlov admitted, on the basis his action were reckless not deliberate.
“My client should have realised his actions caused risk to the baby,” said defence barrister Desmond Fahy. “He was presented with a situation, not of his making, which he could never have anticipated.”
Mr Fahy said Kozlov had never even picked up a baby prior to that day and had never intended on harming the baby.
Judge Stephen Fowler QC was critical of Kozlov’s conduct after the incident: “The defendant found the baby lying on a grassy area. He noticed a large lump on his head which was blue in colour but failed to inform the baby’s mother what had happened,” he said. “He left the flat, stopping to talk with friends, making no mention of the serious events which had taken place.”
The judge added: “He failed to explain the injuries. Nor did the mother give a candid account. Hospital staff were misled, having been told the injury occurred when the baby fell from his cot… In my view, supported by medical evidence, the misinformation could have had a catastrophic impact on the baby’s treatment.”
Judge Fowler described the incident as “a most reckless act of significant seriousness and said: “No matter the inexperience, it is patently obviously to hold a baby by an open window whilst drunk, particularly at a high floor, could cause significant danger. This case is so serious only a custodial sentence will suffice.”
Kozlow, who has already served a signficant spell in prison, was jailed for two and a half years custody, broken down by 15 months in prison and on 15 months on supervised licence.
He is also disqualified from working with children and young people until further order.