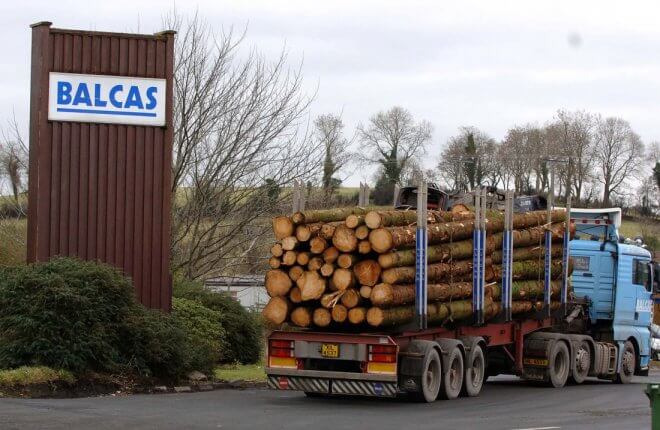 Balcas employs 300 people in the Enniskillen plant and a further 50 in Scotland.

THE sight of log-loaded lorries is a common one on Fermanagh’s roads, but if a solution is not found to the conundrum of the post-Brexit border soon, they could become a rarer sight.
Fermanagh’s timber industry employs a significant number of people in the county, and is very much a cross-border affair.
Last week the Timber Industry Brexit Forum, worried about the potentially disastrous affects of a hard border, handed in a report to the government calling for as soft as border as possible after the UK leaves the EU.
Balcas, one of the biggest employers in Fermanagh, has been a member of the Timber Industry Brexit Forum since its inception. CEO Brian Murphy said the timber industry was an all-Ireland one.
“Balcas has approximately 23,000 commercial cross border movements annually, and is very concerned to minimise the impact of any border checks that may arise out of the UK leaving the European Union,” he said.
In the report, ‘Brexit: Protecting Growth in the Irish Timber Industry’, the industry leaders suggested the post-Brexit border copies the Canadian-US or the Norwegian-Swedish model, such as interchangeable customs officials and mutual recognition of customs officials and police.
With regard to these suggestions, Mr Murphy said: “Balcas’ strong preference is for no interference with cross border movement of goods.
“Insofar as the shape of the solution incorporates this wish, and accommodates the Prime Minister’s stated intention to retain an invisible border in Ireland, then Balcas is not concerned with how the model is named.”
In the report, presented to Ireland’s EU commissioner Phil Hogan in Dublin last week, also warned that if the timber industry were to shrink it not only would have a significant impact on the economy right across Ireland, north and south, but could also lead to deforestation and impact the country’s environment.