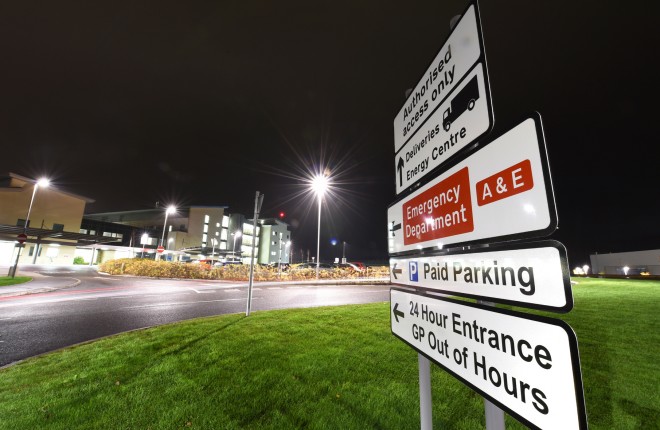 Waiting times have soared at A&E in the South West Acute Hospital.

WAITING times at the emergency department of the South West Acute Hospital have soared over the past year, according to new figures.
The South West Acute was among those which reported the largest increase in attendances in 12 months, up by 353.
The rise comes despite ongoing appeals by the Western Trust urging people to only attend A&E in the event of an emergency, and to consider alternatives where possible such as local pharmacies. The rise in attendances can also be attributed the ongoing merger of GP surgeries in the county and the subsequent long delays in getting an appointment to see a doctor.
A total of 3,109 people attended SWAH’s ED in March of this year compared with 2,756 in March 2017. New attendances this March totalled 2,921, up by 306 in 12 months (2,615). Just over 33% of patients who visited SWAH this March faced a wait of up to four hours to be seen, up from 29% the previous year.
Only 58% of attendances at SWAH in March 2018 were treated and discharged, or admitted within four hours of arrival – a significant drop from the 87% in March 2017. More worryingly, last year only three patients were forced to wait over the 12 hours but this year that figure has rocketed to 148.
Median waiting times from arrival to departure have almost doubled in a year from 3 hours 30 minutes to 6 hours 41 minutes.
During March 2018, 95 per cent of patients admitted to hospital spent almost three times as long in the ED (19 hours 31 minutes) than those discharged home, compared with 6 hours and 32 minutes last year.
The median time patients who were discharged home (not admitted) spent in the ED was 3 hours 5 minutes in March 2018, slightly longer than the time spent in an ED during the same month last year (2 hour 21 minutes).
In March 2018, 95 per cent of attendances at SWAH were discharged home within 8 hours 26 minutes of their arrival, almost four hours longer than during the same month last year.
The Emergency Care Waiting Time Statistics for Northern Ireland were released by the Department of Health on Thursday.
In a statement, the Health and Social Care Board apologised and said emergency departments had experienced a very challenging winter.
“Nobody in the HSC considers this to be an acceptable position and we would apologise to anyone who has had to wait for a long period in an emergency department to be seen, treated, and either admitted to hospital or discharged,” a spokesman explained.