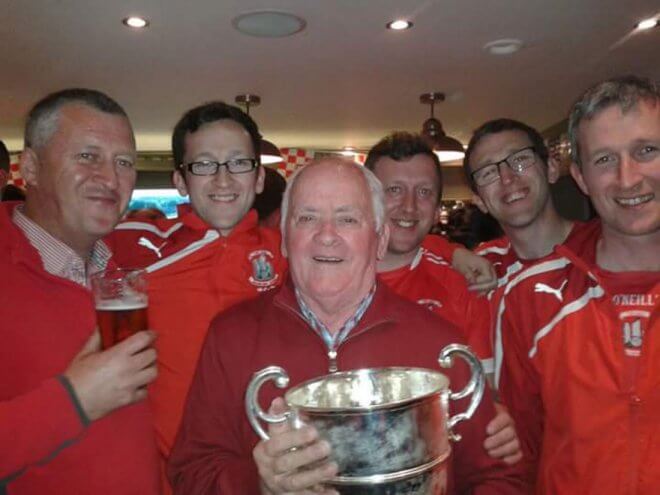 TRIBUTES have been paid to popular Trillick man Willie McElholm following his death last week at the age of 80.
Late of 99 Moorfield Road, Lisdoo, Willie passed away last Friday, 13th April at home surrounded by his loving family after a short illness.
Having initially worked as a bus driver in England, Willie returned home where he was employed by J.J. Scollan, Irvinestown; Ready Mixed Concrete, Enniskillen and later at Manor Auto Salvage near Irvinestown.
Willie was predeceased by parents Willie and Ellie, siblings Maura (Breen), Kathleen (McCann), Sean and Sarah (Garrity) and is survived by Herbie, Eileen (Monaghan), Angela (Maguire), Sammy and Vera (McCann).
A life-long supporter of Trillick St Macartan’s GAC, Willie was a former club chairman and treasurer and held the title of Honorary Vice-President. Alongside Patsy McCaughey, he received a Gold Credo award for over 50 years voluntary service to his beloved club.
Over 400 people posted their sympathy on the club’s Facebook page with the popular Trillick clubman described as ‘a true gentleman’ and ‘a great friend and neighbour’.
“We offer our thoughts and prayers to all his extended family and many friends, especially his nephews and nieces who lived with and cared for Willie: John, Eileen (Sweeney), Orlaigh (McCann), Colette, Malachy, Neil, Catherine, Brendan and Joseph,” a club spokesman said.
“Willie provided decades of loyal service on committees in many guises for his beloved Trillick and was recently recognised with a Gold Credo award from Tyrone County Board. Willie was around for all of Trillick’s championship successes and took great pride in our recent O’Neill cup victory in 2015.”
Willie’s nephew Liam McElholm told the Herald: “Willie was very much more than an uncle and more of a father figure to the nine children of his late brother Sean.
“He was a much loved uncle to 55 nephews and nieces and another generation of 156 grand-nieces and grand-nephews.”
Willie was laid to rest on Sunday in Magheralough Cemetery following Requiem Mass at St. Macartan’s Church in Trillick which was attended by hundreds of people. Members of the GAA club formed a guard of honour for Willie on his final journey through his home village while Sunday’s underage coaching was cancelled as a mark of respect.