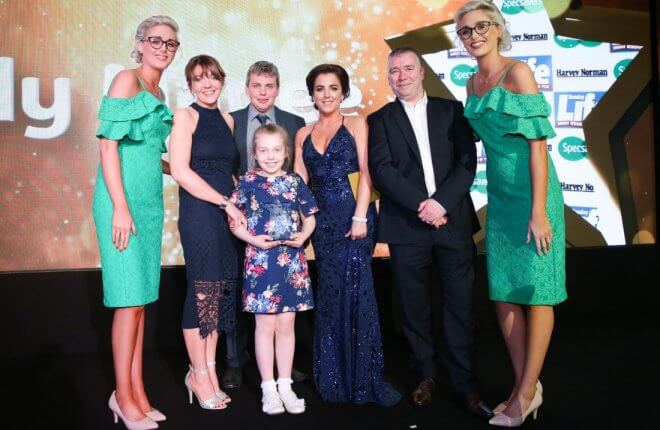 Winner of the Spirit of Youth award, Emily Magee is presented with her trophy by Eamonn McFadden, from category sponsor Harvey Norman and ‘Derry Girl’ Jamie Lee O’Donnell. Also pictured are ambassadors from title sponsor Specsavers, Nicola and Alison Crimmins and her parents David and Jacqueline Magee. Emily was one of ten winners at the Sunday Life Spirit of Northern Ireland Awards with Specsavers. Photo by Kelvin Boyes/Press Eye

THE family of the late Thomas Magee had every reason to smile with pride at the weekend as his big sister Emily received a top award for her fundraising efforts in his memory.
Four-year-old Thomas from Greenhill Road in Maguiresbridge, died at the family farm on the evening of April 6th last year in an incident involving a digger.
Just over one year on from their tragic loss, his heartbroken parents David and Jackie attended the Sunday Life Spirit of Northern Ireland Awards to proudly watch their daughter be named the best of the best.
Emily (9) was among the unsung heroes honoured at the star-studded evening, held at the Crowne Plaza in Belfast on Friday night and attended by stars of stage, screen and sport.
The Maguiresbridge Primary School pupil has been working very hard since she lost Thomas, raising money to make other little children’s wishes become reality through the Make a Wish Foundation. She initially aimed to raise £10,000 in his name by hosting various events including a coffee morning at her school and a Trek for Thomas last New Year’s Eve through Gortin Glen Forest Park.
But Emily has smashed that target by raising almost £21,000 for the charity and is determined to make a difference to the lives of other young children across the North.
Guests at the glittering awards bash were moved to tears by Emily, who was named the Spirit of Youth winner. She received her award from Derry Girls actress Jamie-Lee O’Donnell and Eamon McFadden from award sponsor, homeware retailer Harvey Norman.
One Direction star Niall Horan, who helped judge this category, was unable to attend the event on Friday as he is on tour but sent a video message and revealed he will meet all the winners at the Northern Ireland Open golf tournament at Galgorm Castle in August, where his Modest Golf company will be the event’s official partner.
“Emily is a little superstar, she is well and truly an inspiration and her brother Thomas would be very, very proud of her,” said Niall. 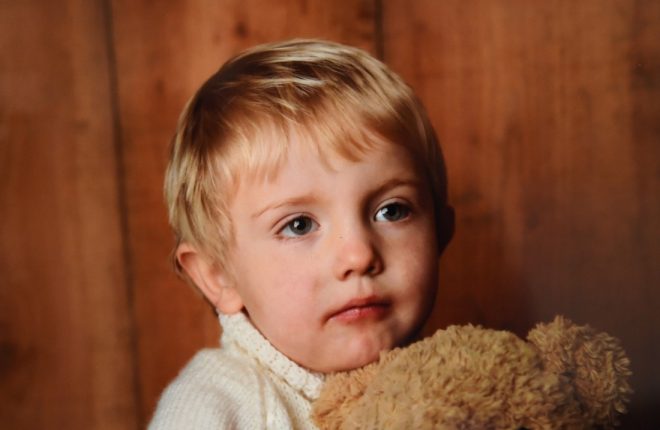 Four-year-old Thomas Magee from Maguiresbridge died at his family's farm on the evening of April 6th.

‘Everyone loved Thomas, he was that kind of child’