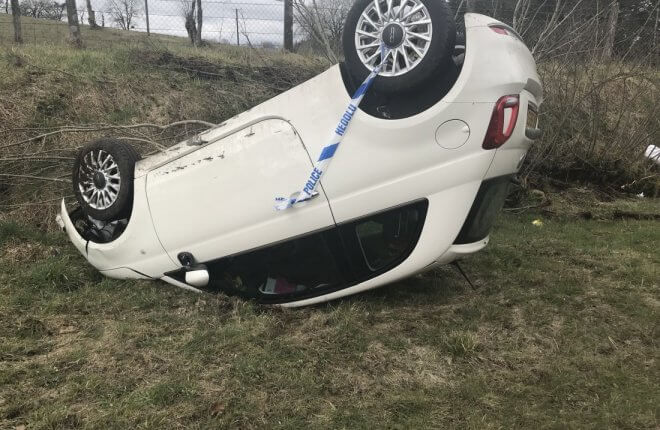 The Fiat 500 car in which the young women were travelling in ended up on its roof.

Two young women had a lucky escape over the Easter bank holiday weekend after their car flipped over on the A4 Belfast Road near Brookeborough in the early hours of Saturday morning.
The Fiat 500 car the pair were travelling in ended up on its roof in a ditch after the female driver swerved to avoid a badger. The incident occurred around two miles from Fivemiletown on the main Enniskillen road just after 12.30am.
While the two women were not seriously injured unfortunately the badger wasn’t as lucky.
UUP Cllr Victor Warrington, who lives nearby, came upon the accident scene a few hours later and supplied the accompanying photographs.
“The two women were very fortunate as the area where the crash occurred has been the scene of three fatalities in recent years,” he told the Herald.
It’s believed that the two young ladies, who are understood to be local, weren’t travelling at any great speed when the badger ran out in front of the car, causing them to swerve, lose control and flip over.
“These girls may have panicked and swerved to avoid hitting the animal but thankfully they were very lucky although I’ve no doubt that they were probably shaken,” Mr Warrington added.
A PSNI spokesman said this week: “Police received a report of a one-vehicle road traffic collision on the Belfast Road, Brookeborough at approximately 12:40am on Saturday 31st March.
“It was reported that the vehicle had overturned. There were no reports of any injuries.”