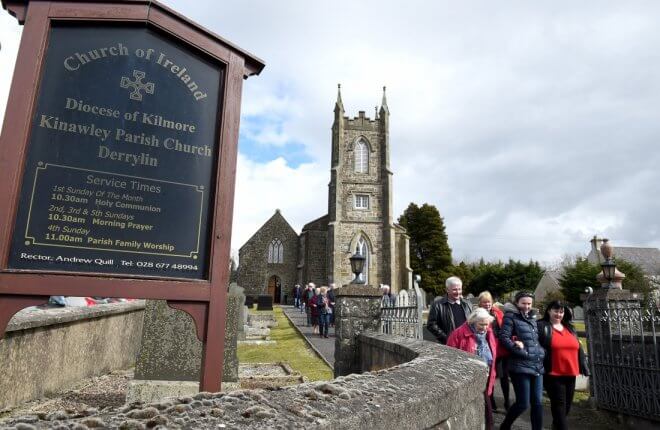 Around 100 people attended this afternoon’s Memorial Service in Derrylin Parish Church in memory of the Gossett family. Photo: Andrew Paton

The village of Derrylin fell silent this afternoon to remember three generations of the same family killed in an arson attack at their home just over a month ago.

Denise Gosset (45), her daughter Sabrina (19), son Roman (16) and Sabrina’s 16-month-old daughter Morgana Quinn all died in the blaze at their rented bungalow on Molly Road on the morning of February 27th.

Daniel Allen (27), of the same address, remains in custody charged with four counts of murder and one of arson with intent to endanger life.

Around 100 people from all sections of the community gathered for a multi-denominational service in Derrylin Parish Church, led by Rev Alastair Donaldson and Father Gerard Alwill, parish priest of Knockninny.

They were joined by Denise’s daughter Samantha Gossett and Samantha’s husband James Dickens, who had travelled over from England especially for the memorial.

Among the congregation was Tommy Fee, who owns the rural property that was gutted by the early morning blaze.

Rev Donaldson told those gathered: “This has been a difficult time for a small village like Derrylin. Today many of you have both come to offer comfort and to seek comfort. It’s a very human act indeed. Those terrible events of February 27th may have many of you asking the question and I would imagine Samantha and James have asked the same: ‘Where was God in all of this?’ That feeling would be understandable to a large extent.”

Prayers were offered by Fr Alwill for the family and for neighbours and friends who tried to help the family on the morning of the fire as well as the emergency services who attended the blaze.

As the service was underway, police issued the first photographs of the four fire victims along with a further appeal for information about the incident. Detective Inspector Peter McKenna said: “I am appealing to anyone who was in contact with Denise, Sabrina or Roman in the weeks leading up to their murders to get in touch with detectives.

“I would also like to hear from anyone who was in the area of Molly Road between the hours of midnight on Monday, 26th February through to 7.20am on Tuesday, 27th February. Any information, no matter how trivial it may seem, could prove to be vital to this investigation.”