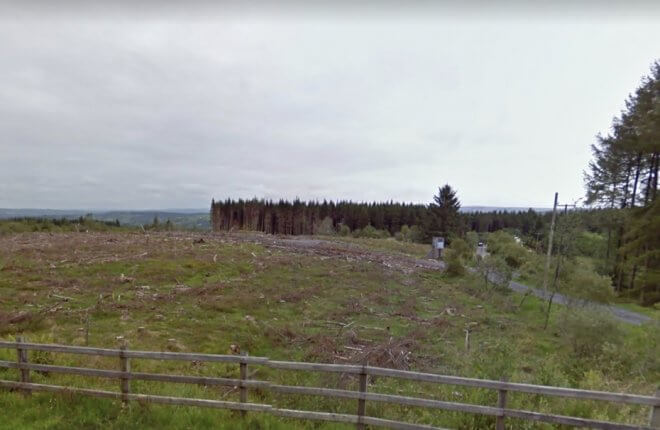 The site of the windfarm in Brookeborough

THE OWNERS of a windfarm development near Brookeborough believe the criminals trying to extort money through a vicious campaign of intimidation may be from the locality.
They revealed that local people working on the project have received threats at their homes.
Over the past month, the Teiges Hill Mountain windfarm has been vandalised and threats have been hand delivered to an employee’s door in the Brookeborough area in an apparent attempt to extort money from the windfarm company.
At the end of January, electricity poles at a property close to the site were cut and destroyed with a hand saw by a group of people attempting to sabotage the development.
This behaviour has since escalated and local workers have been left shaken and distraught over the intimidation which has recently intensified.
Energia Renewables, owners of the Teiges Mountain Wind Farm, begun construction in August 2017, with between 20 and 50 construction workers on the site daily.
Peter Baillie, managing director of Energia Renewables explained that the threats first came in the post to the previous developer in England but more recently they have been hand delivered to workers here.
“Recently there has been threats coming in the post to individual local workers. This started with the vandalism of the electricity poles but about three weeks later we started to get some threats and over the weekend there has been threats made to local workers who are very distressed by this.
“People are looking for money – it is extortion and they are hoping to get a pay off from us. We cannot engage with people like this – with our company background, and our investors, we have anti-bribery and anti-corruption rules that govern what we do.
“The people who are doing this are damaging peoples lives, and ruining livelihoods while obstructing a potential benefit for the whole community. It is more than an individual doing this. The vandalism was done by a number of people so there is some organisation in this.”
Brookeborough and the surrounding areas stands to gain from the windfarm with £50,000 being pumped into community groups, including the local GAA club, but Energia Renewables has warned that this continued investment will be in jeopardy if the threats and vandalism continues.
“The windfarm can only continue to make payments if it successfully completed on time and without that there will not be funding for future community groups. We are very concerned about the escalation of the threats on our employees, but we are going ahead with the funding but we will be making it clear that unless these threats are stopped, the future is at risk.
There are 19 groups getting funding in the community, but I really have to emphasis that all of that is being put at great risk,” said Mr Baillie.
Police are currently investigating the incidents, and the company is appealing to anyone with information to come forward.
But Mr Baillie believes the culprits may live in the local community: “The difficulty is pinpointing who is involved but we believe it is probably people who are very local.”
“The Police are involved and we are appealing to the community that if they have any influence, or information that could assist with getting this stopped please get in touch.”