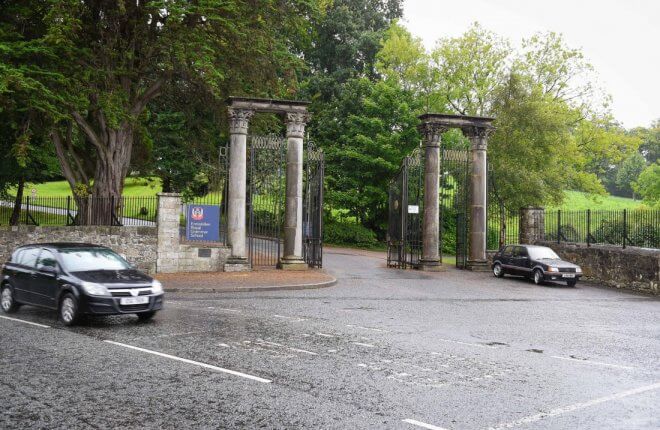 A 23-year-old man who collided with school gates before making off from the scene has received fines totalling £300.
At 2.20am on August 3rd last, police received a report of a single vehicle road traffic collision on the Shore Road in Enniskillen involving a Volkswagen Polo which had caused damage to the gates of Enniskillen Royal Grammar School and the pillars of a nearby private residence. There was no sign of the driver of the car when police attended the scene but they were later informed
Liam McMorris, of Navar Guest House, Derrygonnelly Road, Derryvary Beg pleaded guilty to driving without due care and attention and with a defective tyre and failing to remain at the scene of the accident.
Further charges of failing to stop and failing to report a damage-only accident were withdrawn.
A vehicle check identified McMorris as the registered owner of the car but when police called at his home, he was not present.
Police were notified of man walking along the Derrygonnelly Road at 5.20pm but when they patrolled the area there was no sign. They returned to McMorris’ home where they
found him injured and agitated. He told police that he walked eight miles after being involved in the collision. He admitted failing to remain at the scene but denied knowing that one of his car tyres had been defective. He told police that road condition had been wet at the time and that he had been travelling around a corner when he lost control of his vehicle.
Defence solicitor Gary Black told the court: “He knew that his tyre was in poor condition but it was within the legal tread depth. He was an R-driver at the time and this was his first time in a collision. He left his vehicle at the scene as it was not in a condition to be driven any further.”
Deputy District Judge Paul Conway imposed fines totalling £300 and three penalty points.