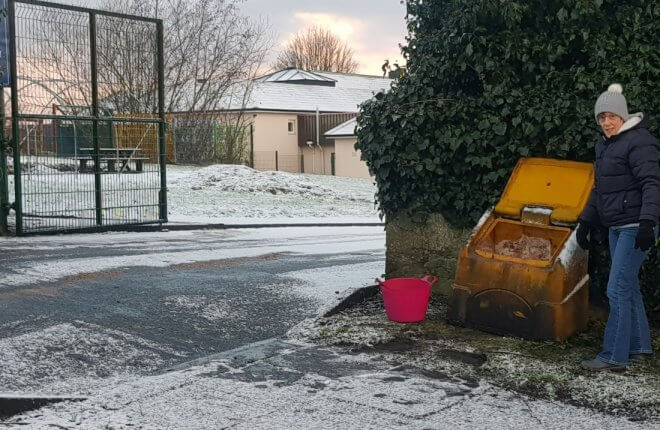 A GROUP of frustrated Lisnaskea residents have taken matters into their own hands when it comes to treating the steep, slippery hill leading to their homes.
All winter the community in Lakeview have been faced with a treacherous, untreated hill after the neighbourhood’s salt box was moved by Transport NI inside the grounds of the Moat Primary School.
This meant residents could not access it in the evenings or early morning, when it was needed most, as it was behind locked gates.
Speaking on an icy morning last Thursday, local woman Caroline Rice said: “We’re at the end of our tether here. We’re at the top of a big hill, behind the workhouse, and there’s a primary school on our hill.
“They came out a couple of years ago to do road works and moved our salt box behind locked gates.
“At the time we asked them to move it back out but they said they said they couldn’t because they’d filled it and it was too heavy.”
Ms Rice said she had to walk her six-year-old daughter across town to St Ronan’s Primary School on bad mornings, while children at the Moat Primary School had to be dropped off at the bottom of the hill.
She added the situation was actually dangerous, with the potential of cars to crash into local homes or slide down the untreated hill onto Lisnaskea Main Street.
On Friday the residents finally were able to take action.
With less grit now in the salt box, Ms Rice said she and another woman, Gerda Walmsley, were able to move it.
“It’s out of the school, but God knows how long we’ll now wait for it to get filled,” she said. “They should be ashamed it took two women to come and move it.”
A spokesman for the Department agreed “the salt box should be accessible at all times” and said “in future it will be positioned on the public road.”
Meanwhile, despite residents claiming otherwise, the Department have insisted the main roads in Lisnaskea were treated last week.
“All the scheduled routes in Lisnaskea, including Main Street, were gritted on Thursday evening and twice on Friday morning,” the said.