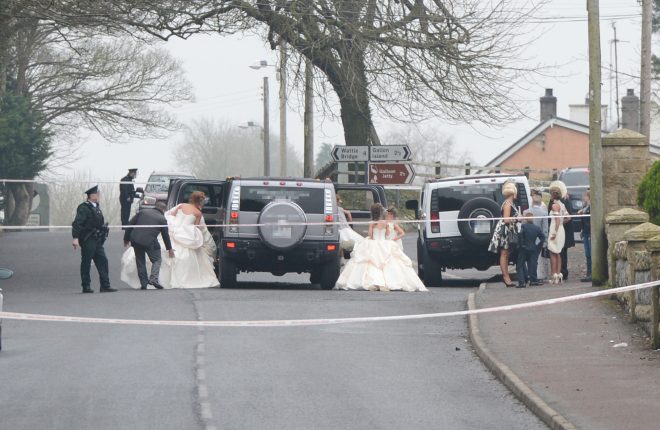 JUST one working day before a trial was to commence in a murder case, the four accused have changed their pleas and admitted alternative changes, which were agreed by the Public Prosecution Service.
In a bitter twist, the victim was killed by his own nephew, who has accepted manslaughter.
In turn, the nephew’s son accepted wounding the son of the deceased man, all of which occurred against the backdrop of what should have been the happy celebration of a family wedding.
Bernard ‘Barney’ McGinley, was gunned down as he attended a family wedding at St Mary’s Church, Newtownbutler.
His wife and grandchildren witnessed the horrific scene on 11 February 2015.
Mr McGinley, who had travelled from Athlone for the wedding celebration, was airlifted to hospital by PSNI helicopter, but passed away from his injuries.
His son Bernard Oliver McGinley Jnr was also attacked and sustained serious injuries.
Police immediately began a murder enquiry and determined the incident to be linked to a feud within the traveller community.
Four people were arrested, all of whom are members of the wider McGinley family.
Patrick McGinley (49) of Ardlougher Road and his son William McGinley (29) of Sallys Wood both in Irvinestown; along with Patrick McGinley (24) of Lisfarrel, County Longford, and a youth who cannot be identified for legal reasons, were each charged with murdering the victim and attempting to murder his son, Mr McGinley Jnr.
All four defendants initially pleaded not guilty and they were due to stand trial on Monday 12 February at Dungannon Crown Court, in a case which was scheduled to last for around five weeks.
However the case was listed for mention at Belfast Crown Court last Friday where defence barristers for each accused asked for them to be re-arraigned on new charges which had been agreed by the prosecution.
The elder Patrick McGinley pleaded not guilty to murder but accepted the manslaughter of Mr McGinley Snr, whilst his son William denied attempted murder but he accepted wounding Mr McGinley Jnr with intent.
The two remaining defendants pleaded guilty to single counts of affray only.
All defendants were remanded on continuing bail terms whilst pre-sentence reports are prepared.
Sentencing is scheduled to take place on 23 March.