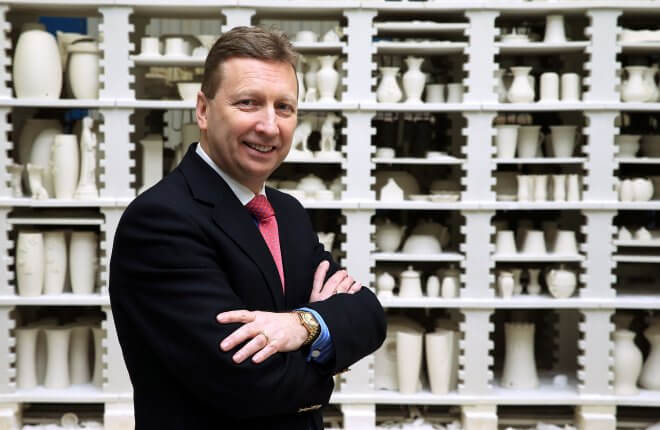 After a hugely successful 2017 marking 160 years of Belleek Pottery, its managing director John Maguire is gearing up for another busy year having just been appointed the new High Sheriff for Fermanagh.
While it is largely a ceremonial role, the principal duties of a High Sheriff include welcoming members of the royal family to the county and providing support to High Court judges when on circuit.
Mr Maguire, who resides in Lisnarick, was in the US this week on business.
Speaking to the Herald from Atlanta, he said he was both surprised and honoured to be considered and selected for this position.
“Of course, I’m delighted to have an opportunity to represent Fermanagh in this capacity. It’s an opportunity to raise the profile of our county where at all possible in a most positive way and to encourage people to visit and invest in Fermanagh.”
Meanwhile the outgoing High Sheriff for Fermanagh Selwyn Johnston has said it was an enormous privilege and honour to serve in the role over the past 12 months, representing and promoting the county.
In one of his final engagements just before Christmas, Mr Johnston attended a special reception hosted by Robert Wood Johnson, the UK’s Ambassador to the United States of America at his Winfield House residence at Regents Park, London. He took the opportunity to extend a warm welcome to both Mr Johnson and Lew Lukin, Deputy Chief of Mission to visit Fermanagh and presented them with books showcasing our beautiful lakeland scenery together with a history of the Inniskillings Regiment during WWI.
Fr Brian D’Arcy, who had met Gregory at a number of events and welcomed him to the Graan for a service to commemorate the 70th anniversary of the crash of the ‘Galley Uncle’ at which killed seven US airmen, personally signed a copy of his latest book ’Gold Collection’, which Selwyn presented to both Minister Burton and Ambassador Johnson.
“It was an honour to be invited to a special reception at the Ambassadors Winfield House residence which is steeped in history and has hosted former US Presidents and The Queen,” Selwyn told the Herald.
Reflecting on his memorable year as High Sheriff, Selwyn added: “I want to thank everyone for their support, encouragement and invitations to community events. I felt it was a privilege to serve as High Sheriff and an honour within the role to both represent and promote Fermanagh.”