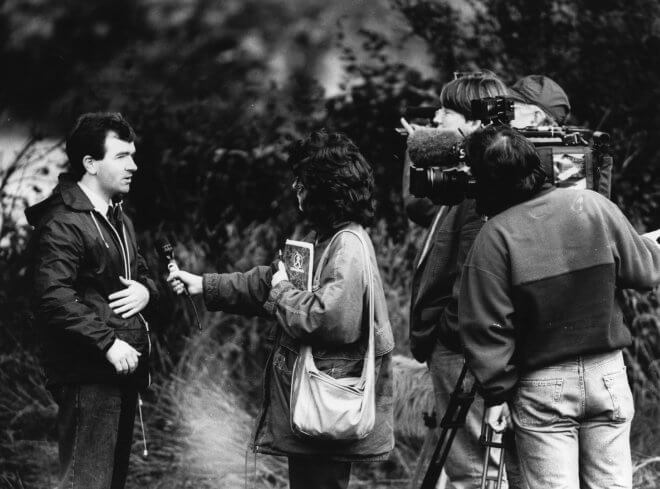 Michael McPhillips being interviewed by the world’s media during the broder roads vigil on Lackey Bridge on January 1, 1993.

AS THE people of Fermanagh enter 2018 unsure of what the next 14 months will bring for our border, memories are being cast back to 25 years ago when the hope of Europe prompted a protest on the Lackey Bridge.
Organised to coincide with the opening of routes between countries in what was then known as the EC, the 72 hour vigil on the bridge between Fermanagh and Monaghan was part of an International Day of Action on January 1, 1993, in solidarity with the dissolving of borders across the continent.
Newtownbutler man Michael McPhillips, who then was a member of the Border Roads Campaign Group, said the world’s media had descended upon Lackey Bridge that day.
“You could float from Cavan into Fermanagh using the waterway of the Woodford river between the Shannon and Erne then, but you couldn’t actually drive the roads that were closed,” Michael recalled.“The foreign journalists used to laugh at this, that you could actually access one state to another by boat but not by road.”
At that time 50 of Fermanagh 59 border roads were closed, and those that were opened had military checkpoints.
“At that stage the Berlin Wall had even come down. We always classed, particularly this Fermanagh region which was heavily fortified with closed roads and checkpoints, we always called it Ireland’s Berlin Wall.”
“It was a tough time to actually live in Fermanagh because I suppose you could’ve classed it as a war zone. It was the most militarised zone in western Europe,” he added.
Michael said many young people today didn’t even know what the checkpoints were, but said anyone older remembered the economic and social difficulties well, and feared what Brexit could bring.
“We’re being told by the British there won’t be a hard border, but I’d be one who’d still have a fear that the whole thing could just come tumbling down and we’d just be back to hard border, but I hope not,” he said.
Michael said that the Lackey Bridge vigil had been very much a civil rights action, as they were attempting “to restore people’s right to travel a road their father and grandfather travelled.”
“It was also a human right,” he added. “Allegedly on January 1, 1993 if you were a European citizen you had a right to cross freely over borders. Every where in Europe that was the case, except here in the north of Ireland.”
As for how people might react if the worst fears are realised and Brexit brings back the hard border, Michael said: “A politician recently said there may be civil disobedience. I wouldn’t say there may be, I would have no doubt there would be civil disobedience.
“As we did ourselves in 1993, it would be peaceful civil disobedience. People would go out onto the streets and object to any hard border being brought about.”