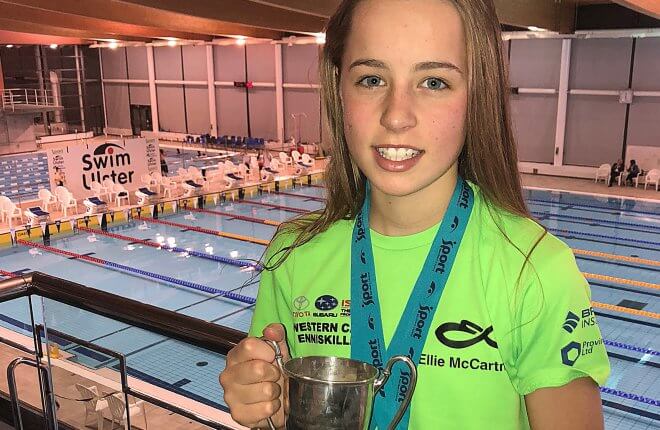 Ellie with Ulster Trophy 2017 at Aurora

On a snowy weekend in Bangor the 2017 Ulster Long Course and Open Championship took place at the 50m Aurora pool.

With the tough qualifying times and other commitments only four of the Lakelanders Senior Squad attended the meet – Ellie McCartney, Caitlin Love, Oisin McManus and Lewis McCartney.
The Open age group meet also allowed Ulster swimmers an opportunity to qualify for the 2018 Commonwealth Games on the Gold Coast. Consequently the competition would be tough with more than 600 entries over the three days of competition with heats and finals in most events.
On the first day of competition Ellie McCartney, aged only 12, competed in two events finishing 21st in the 100m freestyle. In the 100m breaststroke Ellie qualified fifth seed for the final and swam a wonderful race against much older swimmers to finish fourth missing out on a medal by just over a second.
On Saturday, the young Lakelander swam in the 400m freestyle for the first time at this level of meet and finished 23rd as well as qualifying for finals in the 200m individual medley and the 50m breaststroke finishing eighth and seventh respectively in Ulster.
On the final day Ellie pulled out all the stops to finish as first seed for the 200m breaststroke and in turn being awarded Ulster Junior Champion in that event following the performance in the heats. Lakelander Coach, Rob Eynon, spoke at length with Ellie about tactics and race procedure for the Finals later that evening.
In the 200m breaststroke Ellie was third after 120m, but dug deep to power through the last 80 metres to win with the last strokes of the race in a time of 2:39.88, a five second PB. This left her 2017 Swim Ulster Open Champion at 200m breaststroke and probably the youngest Open Champion in the history of the Swim Ulster competition.
Photographs and interviews with national newspapers followed once Ellie got her breath back.
Looking at the Cup it was great to see a former Lakelanders swimmers name on it, Orla McGandy, as well as a former head coach Sharlene Brown.
After the hazardous three and a half drive to Bangor on a snowy Friday morning, Oisin McManus lined up for the 400m IM and despite not performing to his best finished seventh. With little time to recover, he lined out for the 100m breaststroke and where he clocked 1:23.34.
On day two of the event Oisin’s only race of the morning session was the 100m butterfly, and he was happy with his time of 1:09.56.
After the break Oisin stepped up for the 1500m freestyle where he gave a solid performance with a time of 18:23.19 to come home seventh place.
On the final morning of the event, Oisin’s first race was the 200m IM where he secured a place in the final. He repeated this performance 25 minutes later in the 400m freestyle and later that evening finished eighth in both events with seed improvements.
Caitlin Love qualified for a number of events over the weekend, however she only took part in two events. The 800m free on Friday night and 400 free on Saturday morning, unfortunately she had to pull out of Sunday’s events.
Lewis McCartney swam in five events over the weekend against very stiff opposition. The 15-year-old qualified for events in all four strokes showing his versatility. Some great swims saw Lewis just outside the top 10 in each event and in good form going into the rest of the season.
Oisin and Lewis were joined on the last evening by their relay team-mates, Kealan McShea and Connor McKenzie for the 4 x 100m freestyle where they finished 6th overall and the 3rd Junior u18 team.
The swimmers appreciated the help and confidence having their Coach at galas brought. With an opportunity for swimmers to speak with Rob Eynon before and after each event swimmers could talk about performances and attitudes to racing and training. Once again Swim Ulster, the sport’s governing body, put on a great weekend of swimming.