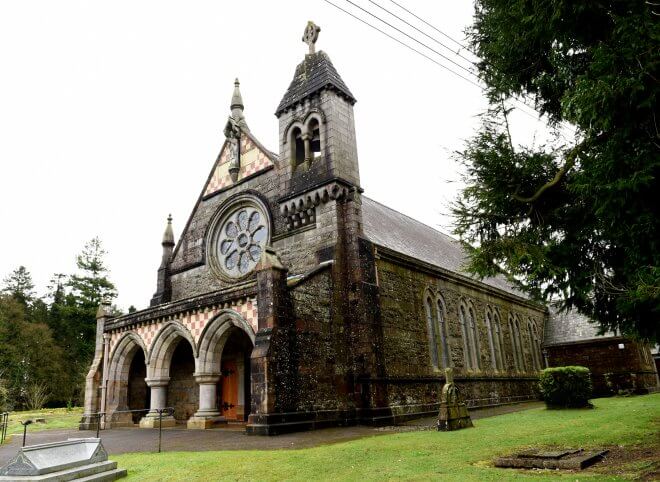 St Mary’s church, Fivemiletown was the scene of a second church robbery. MC 47

EXTRA police had to be called to Dungannon Magistrates Court after a man arrested for burgling two Fivemiletown churches on the same day, became violent on being brought to court, lashing out at custody staff, assaulting two of them.
It further emerged the accused had been on licence from a prison sentence when the latest offences are alleged to have occurred, and is in default of sex offender notification requirements.
Abraham Jakobovits (41) of Fortwilliam Gardens, Belfast is charged with entering Clogher Valley Free Presbyterian Church as a trespasser and stealing a Sony camcorder and approximately £500 in coins. He is then alleged to have entered St Mary’s church – just a short distance from the first church – as a trespasser, with intent to cause damage.
The offences are alleged to have occurred between 19 and 20 December. However, an additional charge alleges Jakobovits is subject to sex offender notification requirements, and failed to provide police with a satisfactory address from 11 October to 21 December.
Due to the level of aggression and violence District Judge John Meehan ordered Jakobovits to remain in the cells while his case was being dealt with.
A detective constable told the court he believed the charges could be connected.
There was no application for bail, and a defence solicitor advised her client’s prison licence has since been revoked as a result of the charges.
Jakobovits was heard repeatedly banging loudly on his cell door throughout both his own case and the majority of the rest of the court sitting, often disrupting proceedings.
This also caused difficulties for another lawyer who wished to consult with his client in the cells, but was unable to “because of an ongoing kerfuffle in custody.”
The case has been adjourned for mention by videolink next month.
Police are currently investigating the circumstances of the assaults on staff at the courthouse.