Advertisement
HomeHeadlineBusinesswoman comes to the rescue of animal sanctuary
Advertisement 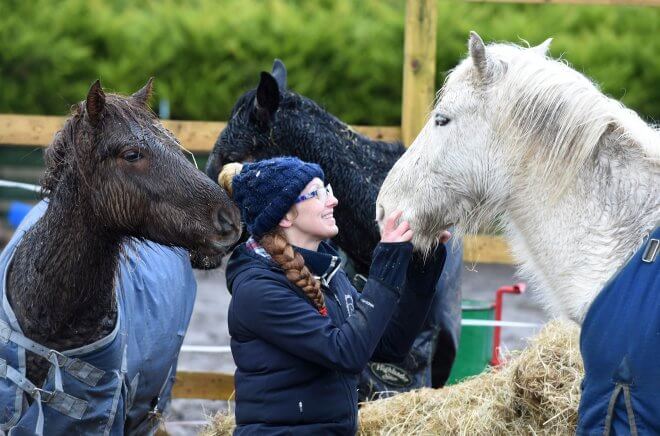 A LISBELLAW equine centre in the middle of a winter crisis has been touched by the kindness of a local businesswoman.
Equine Welfare Network is a small registered charity based in Lisbellaw and currently home to 32 horses, ponies, donkeys and mules who are being cared for by a dedicated team of foster carers.
Due to the number of abandoned equines, and the increasing price of hay due to the fodder crisis which is impacting the entire farming sector, the shelter needs to raise almost £10,000 to remain open until Spring.
Some of that pressure has been eased as Una Burke from Erne Insurance in Irvinestown has kindly performed a ‘Christmas miracle’ by donating £2,000 towards the hay for the centre and has put it on an account with Thompson Hay Straw Haylage.
Kerri Fitzpatrick, founder of the Equine Welfare Network said, “Thanks to that very kind donation, we are sorted with hay and it will see us through the winter.
“We are extremely grateful for the donation and I was totally gobsmacked, but it is really brilliant.”
The funds raised will be used for rescue, rehabilitation, training and rehoming the horses in their care.
Kerri continued, “It has been a really tough summer with all the rain and we ended up having to bring the animals in two months earlier, and that give us two months extra bills that we were not expecting.
“Now there is a major shortage of hay in the area, and the prices have shot up to almost double.
“We go through at least 20 bales a week, and they are £5.50 each so that is well over £100 just to bed the animals.”
Since the summer, the shelter has been inundated with calls from people who are concerned about the welfare of their animals, but due to financial retraints the centre has reached it’s limit.
“It is not a good situation and we now need the support of the community. If we cannot afford to feed them and everywhere else is full and nobody wants to take them on, what are we supposed to do – it is going to have to come to a tough decision.
“We cannot stand back and see them starve.”
To donate to the charity, visit https://www.gofundme.com/ewn-winter-crisis-appeal or text HAYH12 followed by the amount you wish to donate to 70070.