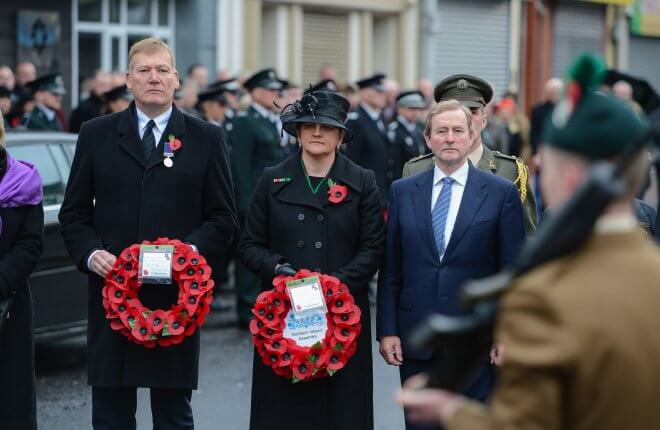 TAOISEACH Leo Varadkar will join dignitaries in Enniskillen this weekend when he lays a wreath at the war memorial on Remembrance Sunday for the first time.
The Fine Gael leader will not have far to travel with his party holding its annual Ard Fheis over the weekend at the Slieve Russell Hotel.
Mr Varadkar will follow in the footsteps of his former party leader and Taoiseach Enda Kenny who stood down in May.
During his premiership, Mr Kenny made five consecutive appearances at Enniskillen’s Remembrance Day commemorations.
A spokesman for the Department of the Taoiseach told the Herald this week: “As has happened each year since 2012, there will be attendance by the Taoiseach at the annual Remembrance Day ceremonies in Enniskillen on Sunday, 12 November. The ceremonies this year will have an added significance as they mark the 30th anniversary of the Enniskillen bombing.”
The late John McCusker, who led the Enniskillen branch of the Royal British Legion as chairman in recent years, first invited Mr Kenny to Enniskillen’s Remembrance Day service in 2012.
Current Chairman John Jones hopes this will continue with Mr Varadkar and Mr Jones offered out an invitation to the new Taoiseach to continue laying a wreath at the Cenotaph.
As usual, an Act of Remembrance will take place at the Cenotaph this Remembrance Sunday, November 12th at 11am attended by politicians including the Secretary of State, James Brokenshire, DUP leader Arlene Foster, Council vice-chairman Alex Baird, US Consul General Daniel Lawton and Viscount Brookeborough. This will be followed by a Cathedral service at 11.30am.