Advertisement
HomeHeadlinePresentation Brothers to be commemorated in Enniskillen
Advertisement 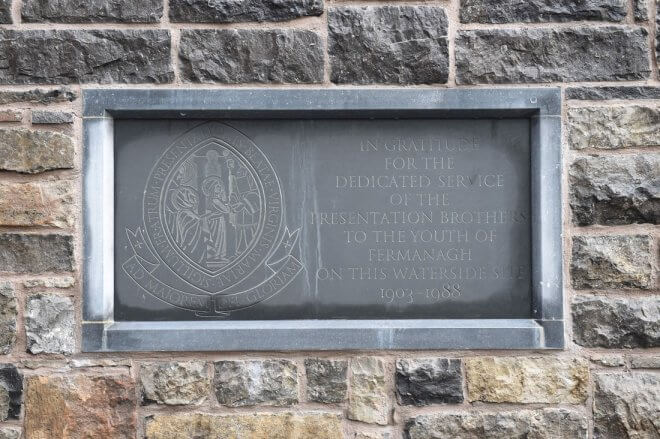 Next Monday a plaque commemorating the involvement of the Presentation Brothers in the educational life of Enniskillen will be unveiled in the freshly rebuilt wall along the Convent avenue/St Michael’s Community Centre.
At the ceremony on November 6th at 3pm, the Order, it is hoped, will be represented by an old boy of St Michael’s Secondary School, Brother Joe Gilleece, a native of Kinawley.
This week, Brother Joe expressed the hope that families with links to the two schools located in the St Michael’s Community Centre yard which the Order staffed at one time will attend the unveiling.
Old boy Alfie McCaffrey, a retired pharmacist, originally from Tempo, who attended the school from 1947 until 1952 said, “The Brothers were supposed to be tough, but I didn’t see anything tough about them. Indeed I had a great time there.
“I have good memories and the Brothers were great, particularly Bro Alfred, the last Superior of the College. He was a very hard worker.
“I have great memories of the old yard – playing football with a handball and climbing and jumping off the wall,” he said.
“This recognition is well deserved. The Brothers did a lot for education in the county and that hadn’t been acknowledged to a large extent,” he added.
Since 1899, the Brothers staffed the old St Michael’s Primary School – it was later relocated in Cornagrade – and, from 1903 to 1957 they staffed St Michael’s Secondary School. Since 1960, they cared for St Joseph’s Intermediate School.