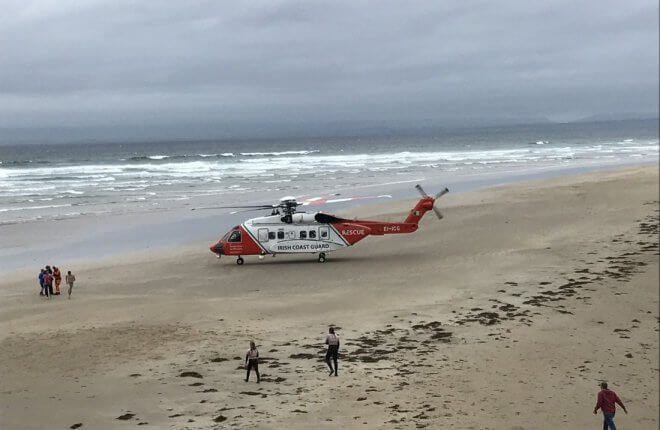 FOUR surf instructors whose quick-thinking skills saved the lives of nine Fermanagh teenagers after they got into difficulty in Bundoran this summer will be recognised for their bravery in Dublin today (Wednesday).
Donegal men Owen Murphy, Fergal Muller, Friederike Rost and Sean Young will receive the “Seiko Just in Time Rescue Award” from the Republic’s Minister for Rural and Community Development Michael Ring at Irish Water Safety’s National Annual Awards Ceremony following the dramatic near-drowning rescue.
Tragedy was averted on Saturday, July 15th when a freak current pulled some of players and coaches with the Fermanagh Super Cup soccer team out to sea at Tullan Strand.
“The players, aged 16 and 17 got into trouble after a training session when a group of them ended up being swept out to sea by strong currents and into the rocks.
The beach is known to be unsafe for swimming, although those involved with the youth team insisted at the time that the young players were in the water only up to their waists when they got into trouble.
Concerned onlookers immediately called the Coast Guard and within minutes Bundoran RNLI, gardai and the Sligo based Rescue 118 helicopter were at the scene.
The lifeboat crew assisted the players, some of whom were bruised from being near the rocks and others who had swallowed salty sea water before ambulances arrived. Nine boys and one coach were taken to Sligo University Hospital as a precaution.
“Owen, Fergal, Friederike and Sean had entered the water on surf boards and helped the footballers to safety.
“They used their knowledge of the currents to assist those in trouble to paddle over to a safer area where they could walk ashore.
“Each instructor returned a number of times until all nine of the teenagers were brought to safety and a major tragedy was averted,” an IWS spokesman said this week.