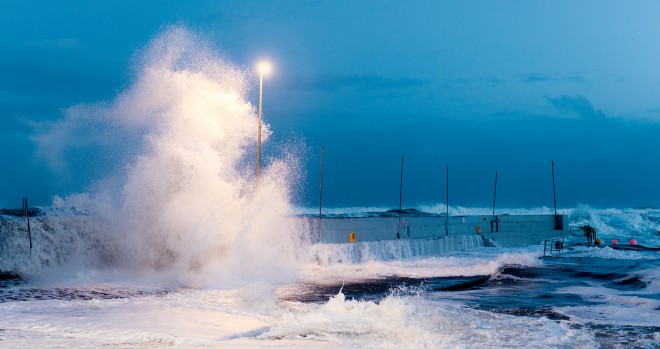 Coastal areas such as Bundoran will bear the brunt of Ophelia.

AN ORANGE weather warning is in place for Fermanagh as Ireland prepares for Storm Ophelia.

Currently a category three hurricane, Ophelia is predicted to weaken to an ex-hurricane by the time it makes landfall in the south of the country tomorrow, however local residents are being urged not to be complacent with hurricane-strength winds expected as well as possible flooding.

Met Eireann has issued a red weather warning for Galway, Mayo, Clare, Cork and Kerry, which means residents there should take action to protect themselves and their property. An orange warning has been issued for the rest of the country. According to Met Eireann, an orange warning “is for weather conditions which have the capacity to impact significantly on people in the affected areas.”

“The issue of an orange level weather warning implies that all recipients in the affected areas should prepare themselves in an appropriate way for the anticipated conditions,” they state.

The orange warning, which is in effect from 9am tomorrow, Monday, until 3am on Tuesday, states average wind speeds between 65 and 80 kmh, with gusts between 110 and 130kmh are expected.

“The winds have potential to cause structural damage and disruption, with dangerous marine conditions due to high seas and potential flooding,” said Met Eireann

However, while the warning also states in some inland areas winds may not be quite as severe, and the strongest warning has been issued for southern counties, Fermanagh residents should prepare, check on their neighbours, and keep an eye on weather forecasts, as the current predictions may yet change.

Fermanagh and Omagh District Council have published a pamphlet for dealing with severe weather conditions which you can find, along with emergency telephone numbers, by clicking here.