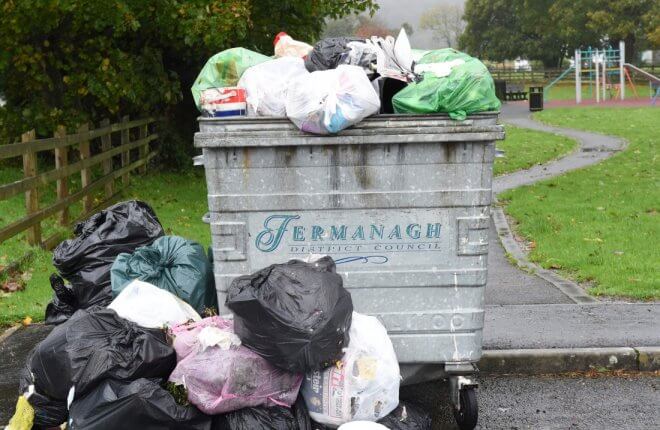 Bin bags full of rubbish have been dumped in a local car park.

FLY-TIPPERS are causing havoc in west Fermanagh as illegal dumping in the Belcoo area is on the rise.
A carpark in the village is the latest victim of illegal dumping as bin bags full of rubbish have been dumped around the area beside a Council bin.
The bin frequently becomes full and people continue to dump their rubbish in the surrounding area.
The latest particular spate of dumping has occurred beside a play park which is widely used by children in the area, and the excess dumping has left the area untidy and it could become hazardous.
Fermanagh and Omagh District Councillor Alex Baird, is disappointed at the recent occurrences, and believes it may be people from across the border who are responsible.
“I know that there has been problems in the past with people coming across the border and dumping in lay-bys and parks on this side of the border because they have pay to get their rubbish lifted.
“It is very disappointing to see this amount of rubbish being dumped in the Belcoo area. I would urge anyone who sees people in the area dumping rubbish to report it to the Council.”
A spokesman for Fermanagh and Omagh District Council said: “Belcoo has been experiencing an increase in dumping in recent times. This bin is for the use of the village orderly in undertaking cleaning duties and has unfortunately been used as a dump point for the public. We are currently reviewing the location of this bin in an effort to prevent dumping occurring.”
Anyone caught fly-tipping can face a fixed penalty notice attracting a fine of £75.