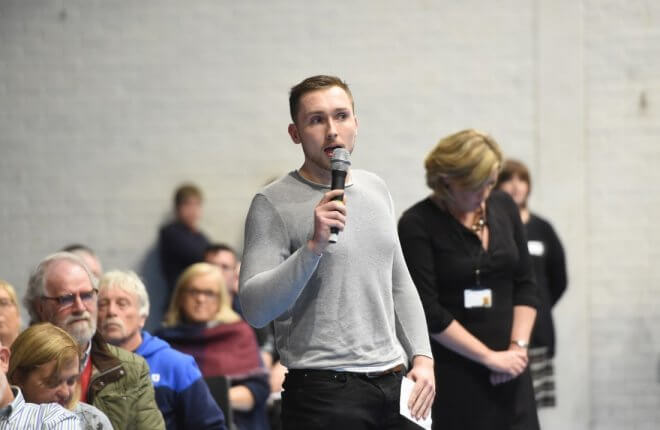 WHILE there was much anger directed towards the Western Trust at the public consultation meeting on Monday night, some was reserved for our elected representatives and the failure of the Stormont Assembly.
As the first politician to speak on Monday night, Sinn Fein’s Michelle Gildernew bore the brunt of it. When she spoke early in the meeting, she was greeted with shouts of “go back to work” and “let the people speak” from the crowd.
Ms Gildernew continued with her speech, talking of the impact the proposed cuts would have on local lives, of how maternity she as a mother herself had first hand experience herself of the services at SWAH.
During her speech she said the cuts were the result of years of “Tory austerity”, which received laughs from the crowd. One local man later got up and addressed this issue directly.
Adam Gannon said: “One of the most disheartening things is we’re having a this discussion on cuts a week after it was announced the MLAs are getting a pay rise. The Trust has its flaws, but they didn’t chose to make these cuts, they were forced upon them. Whether we like it or not, political theatre is where this has come from.”
Mr Gannon said during the 2016 election campaign both Sinn Fein and the DUP had promised significant extra funding for the health service. “Where is that money now?” he asked.
He then said, to great applause: “We had one of our representatives get up and say this was the Tories’ fault. I agree it’s the Tories’ fault, but it was our Tories in Belfast, our Sinn Fein and DUP Tories.
“Things could be fixed in the morning, they could be fixed next week, and they could go back to squabbling. I urge our politicians, get back to work now and respect people’s lives, don’t gamble with them.”
Over the course of both Thursday and Monday night, a wide number of politicians addressed the crowds, many who have a professional background in or personal experience with the local health service. These included Colm Gildernew MLA, Rosemary Barton MLA, councillors Raymond Farrell, Debbie Coyle, and Patricia Rogers, as well as Green Party deputy leader Tanya Jones.