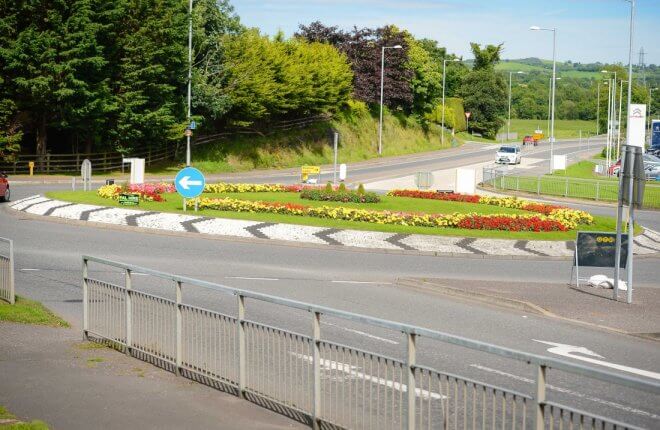 A 26-year-old Irvinestown man who led police on a chase through Enniskillen on Christmas Eve has avoided prison.
Police were called to the car park of Tesco at 5.30am on December 24th last after staff reported a silver Volkswagen Passat driving erratically in the car park.
The car made off towards Erneside and two males were later seen walking towards the car, carrying two plastic containers before getting back in. Police approached the vehicle as it made off and it stopped momentarily before taking off towards Halls Lane. Police activated their flashing lights but the car drove on at 50mph towards Johnston Bridge and struck a concrete traffic bollard. Smoke was seen coming from the car as it drove on towards Cornagrade with no lights on. At the Cherrymount roundabout, police patrol cars were positioned in front of the vehicle as it travelled on towards the Tempo Road. The vehicle was found abandoned with its hazard lights on at Deer Park. The driver Michael Maughan made off from the car and was found behind a house. He made off and was pursued on foot and located a few hours later.
When arrested and questioned, Maughan said he couldn’t remember seeing the police lights behind him and that he had panicked as he was a provisional licence holder and didn’t have a qualified driver on board.
Maughan of Brownhill Meadows in Irvinestown on charged with driving uninsured, unaccompanied and without L-plates and dangerous driving.
Defence solicitor Tommy Owens told the sentencing hearing at Enniskillen Magistrates Court that his client had a dispute with his partner earlier that evening and went off to Enniskillen.
“He panicked when he saw the police and made off. His driving was very poor and he accepts that he was totally in the wrong. He is determined to try and make a better go of life and hopes to be gainfully employed in the near future to make a living for himself and his partner,” Mr Owens added.
District Judge Nigel Broderick described Maughan’s driving as “very poor” and warned him:
“There is no excuse and you’re very lucky that you didn’t injure someone. Community service is a direct alternative to prison and if you don’t complete the hours you will go to prison.”
Maughan was sentenced to 240 hours community service, disqualified from driving for two years and fined £150.