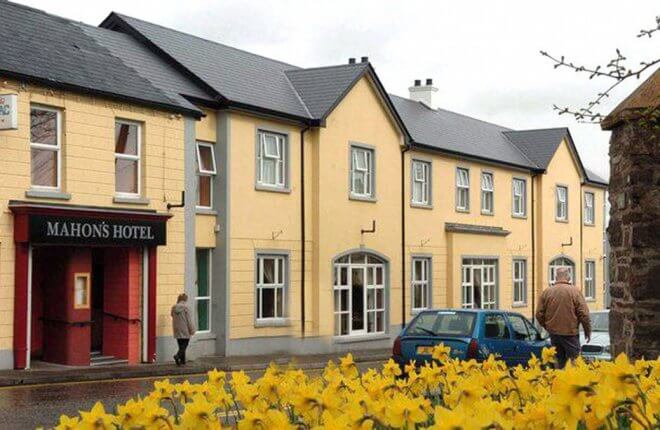 A LOCAL hotelier was left “fearful” after being threatened while removing a man from his business premises, Enniskillen Magistrates Court heard on Wednesday.
David White (30) of Baragh Gardens in Ballinamallard appeared for sentencing after pleading guilty to charges of disorderly behaviour, criminal damage to doors and windows and assaulting Joe Mahon, all of which occurred at Mahon’s Hotel in Irvinestown on December 10th last.
The court heard that police were called to the hotel around midnight following a report that White had been evicted from the bar and was banging on the windows after annoying customers and being asked to leave.
Hotel owner Mr Mahon had taken White by the arm to escort him from the premises but the defendant pushed back. As hotel staff attempted to remove White he tried to strike Mr Mahon who was fearful of being assaulted.
During the incident White told Mr Mahon: “I’ll f***ing get you Joe Mahon” while also smashing a window in a bar door, kicking other windows and damaging a conservatory door. A prosecutor added that the incident had resulted in £470 worth of damage.
White was arrested and shown CCTV footage of the incident after which he was “remorseful” to police and asked them to convey his apologies to Mr Mahon.
Defence barrister Ciaran Roddy told the court that his client had brought full compensation money to court in lieu of the damage.
He added that White was in breach of a suspended sentence handed down at Strabane Magistrates Court last November relating to separate offences.
District Judge Des Perry told Mr Roddy that he was impressed to hear that his client had raised the money which he said was “all too rare”.
The judge added: “Maybe he is someone who doesn’t take drink during the week but clearly he does at the weekend as this incident occurred on a Friday night”.
The judge noted that White had told the Probation Service that he had not consumed alcohol since the incident saying: “I hope that’s right.”
White was sentenced to four months in jail suspended for two years and ordered to pay the £470 compensation for causing damage to the hotel.