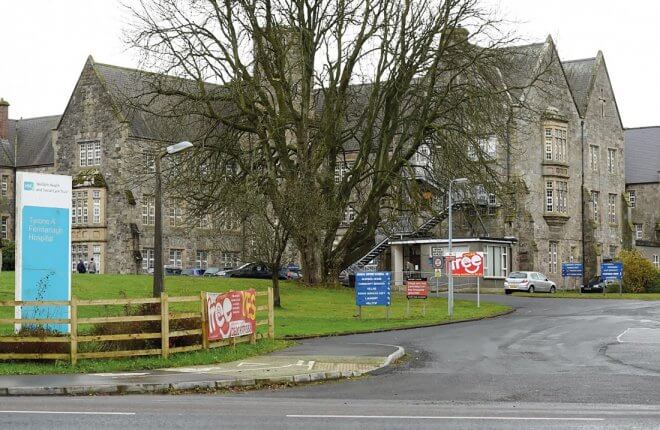 The Tyrone and Fermanagh Hospital in Omagh

FOR over 18 months a finance officer from Enniskillen, who collected the takings for meals-on-wheels delivered to vulnerable people in Omagh, stole the money for the meals rather than lodge it to a Western Trust bank account.
However it was unclear the total amount that was stolen by Sean Masterson (63) of Silverstream Court between January 1, 2014 and October 8, 2016.
After admitting the offence of fraud when he first appeared before Omagh Magistrates Court, he appeared back on Tuesday with a bank draft of £7,650 by way of restitution.
District Judge Bernie Kelly said the “substantial” sum of money proffered by Masterson showed evidence of remorse. She imposed a three year conditional discharge.
The offending came to light when police were called to the Tyrone and Fermanagh Hospital in Omagh by a representative of the Western Trust.
It emerged that Masterson collected money for meals-on-wheels but had not taken it to the finance department to be lodged. The court was told he was arrested as he went to pick up two envelopes.
When questioned by police, he admitted taking money for approximately two years. The figure was estimated to be between £6,700 and £7,650.
However defence solicitor Niall Bogue said there was a “high degree of conjecture regarding the figure” adding that the Western Trust conceded it was not possible to reconcile the number of meals delivered and had estimated a figure.
He explained that the defendant had missed a “considerable” amount of time off work during the 34 months. Mr Bogue said Masterson estimated the amount he took to be between £4,000 and £5,000.
The solicitor said, “The strange feature is he had absolutely no need for the money. It was poor decision making and at the time he was suffering from poor mental health. It was self destructive behaviour.”
The court was also told the defendant was “very remorseful,” had worked with the Trust for 43 years “without issue” and had no previous convictions.
District Judge Bernie Kelly described the people who avail of meals-an-wheels as the “most vulnerable in society.” She compared the offending to “stealing candy from babies.”
Last week she told Masterson if he was serious about having remorse, he would be in court with more money than he estimated.
This week giving him credit for his admission of guilt, previous clear record and repayment, Judge Kelly said, “I recognise it is a somewhat unusual sentence given the beach of trust but I am reflecting the substantial amount of money paid back will benefit the organisation much more than Mr Masterson’s incarceration.”

Mother is jailed for slapping child

A MOTHER from Enniskillen who was advised by a social worker to deal with her children’s squabbling reacted by...

Mother gets jail for slapping her son, aged 7

AN ENNISKILLEN mother who was advised by a social worker to deal with her children’s squabbling reacted by slapping...