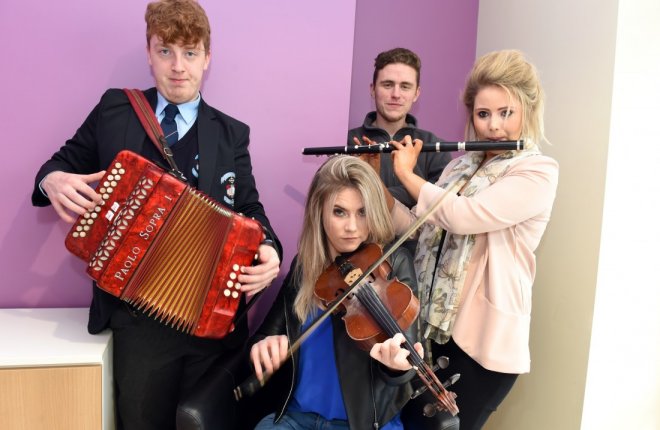 From left; John McCann, Maggie Maguire, Ciaran Owens and Lorena Maguire from the TradAcad which will be based on Friday evenings in Fermanagh House, Enniskillen.

A new academy of traditional Irish music has just been launched in Fermanagh, showcasing the very best of Irish traditional music, song, stories and dance.
Based on Friday evenings at Fermanagh House, Enniskillen, TradAcad will offer traditional music classes on a wide range of instruments including tin-whistle, fiddle, flute, accordion, concertina, banjo, bodhran, guitar, uilleann pipes and many more. Classes will be delivered in small groups and organised according to ability whie individual classes are also available.
The tutors represent some of the best names in traditional music education from across Ireland, working in partnership with Na Piobairi Uilleann, Dublin to deliver top class tuition in the uilleann pipes. Among them will be Derrygonnelly fiddler Maggie Maguire, leader of the Knockmore Céilí Band, 2014 All-Ireland Champions, who hopes to create a centre of excellence for Irish traditional music in the Fermanagh area.
Maggie has been involved in Irish music her entire life, mentoring and encouraging the young musicians of her own county to go on to bigger things being a strong trait of hers. She has held positions as Ulster Youth Officer and more recently Development Officer for Comhaltas. A host of medals and awards have come her way via trio and duet competitions with her brother and sister, as well as solo accolades. She is regularly sought after as an adjudicator and was a member of the Echoes of Eireann Comhaltas tour of 2013. Maggie holds a degree in music from the University of Ulster and has been involved with various projects including Michael Ni Sullibheain and the RTE Concert Orchestra.
Assisting Maggie to teach at TradAcad will be her sister Lorena who plays the flute and whistle along with John McCann (Button Accordion), Ciaran Owns (Banjo/Guitar) and Gay McKeon (Pipes).
In addition, the TradAcad will host youth session, recitals and some workshops with visiting artists. There is also an instrument bank with a range of instruments available for students to hire. The Trad for Tots programme will cater for younger age groups (3-6 years) and there will be several classes for adults. Students wishing to pursue grade exams will be offered accreditation through the London College of Music (which provides an opportunity to secure additional UCAS points for third level applicants).
Maggie, who runs a music school in Derry, says if ever there was a time to take up traditional music, this is it!
“For me traditonal music is in the blood as my grandad Sonny played the accordion and I have also been influenced by my parents Betty and Sean. I already teach a lot of music in Monaghan, Tyrone and Fermanagh and wanted to bring it all together. There are so many great musicians in Fermanagh who we should really focus on. In particular we would like to see piping take off here again. This is such an exciting time for traditional music in the Fermanagh area and it remains very strong. We have a dedicated team of great teachers ready to deliver a high standard of teaching to students in this area. It really is an amazing opportunity.”
Join the TradAcad team at their Registration Day today (Friday, 29th September) from 4.30pm at Fermanagh House or get in contact with Maggie on 077 04487447, email: tradacad1@gmail.com or check out facebook.com/tradacad. Classes commence on Friday 6th October so don’t miss out.