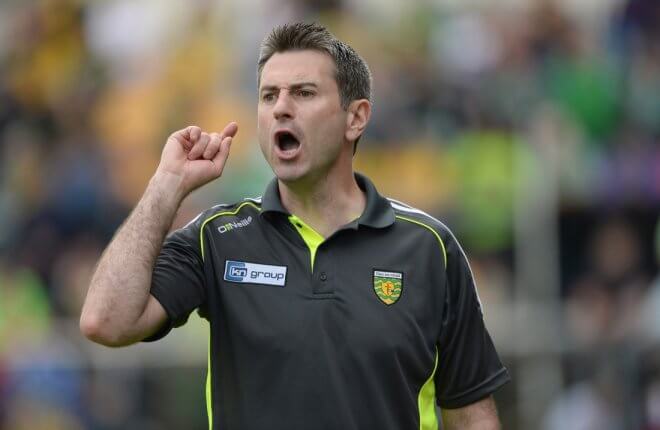 Rory Gallagher is back on home turf.

Former county star Rory Gallagher was ratified as manager of the Erne County at Monday evening’s County Board meeting in the Enniskillen Gaels Clubhouse.
Last week the Fermanagh Herald headlined that the County Board looked likely to make the sensational appointment to succeed Pete McGrath in the hot-seat.
Belleek man Gallagher only stood down from his post as Donegal supremo early last month and is quick to take up this new role in his native county.
Now living in Killybegs, Gallagher was the only name put forward by the ‘special’ committee which was brought together to appoint a successor to McGrath.
Gallagher’s backroom team hasn’t been officially confirmed yet, but Tyrone All-Ireland winner Ryan McMenamin is a definite there. It has been rumoured that Belcoo’s Shane McCabe and Enniskillen’s Ryan McCluskey may also play a part in the backroom team.
For Gallagher though it’s a return to Fermanagh where he made his name as a star player.
He had been coach of the Tir Conaill team team which won the All Ireland title in 2012 when he and the then manager Jim McGuinnes formed a successful partnership.
When McGuinness moved on from the county Gallagher was appointed to the hot-seat where he led Donegal to two senior Ulster final appearances in 2015 and 2016.
Although he still had a contract with Donegal until 2019 he stepped down this season after suffering heavy defeats to Tyrone and Galway.
Now he takes over the reins of a county side struggling for form.  Relegated from Division Two the Ernemen will be looking to get back on track and get a good run in the Ulster Championship.
At Monday night’s County Board meeting to ratify Gallagher’s position Newtownbutler delegate Eugene Heuston, who proposed the Belleek man, described Gallagher as ‘a proven manager.”
“His record with Donegal shows that and he will be a good fit in Fermanagh.”
Seconding Tempo’s John McElroy said that although he had past experience of Gallagher as a coach in the past and rated him in the bracket of Derry’s Micky Moran.
“In my view his football brain and ability is second to none,” he added.