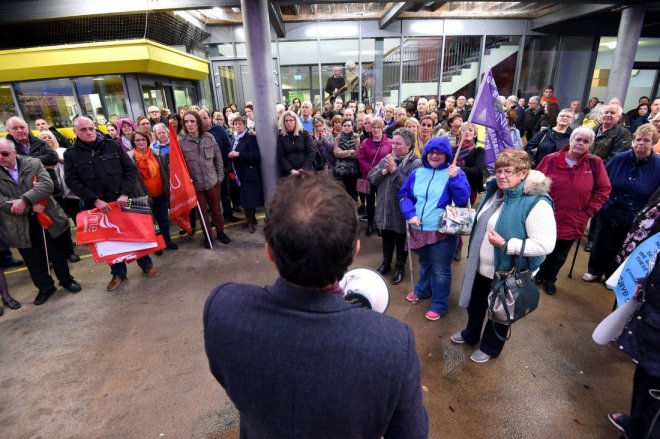 Donal O’Cofaigh called for “people power” to save SWAH services.

THE people of Fermanagh have been urged to come out in their droves for the re-scheduled public consultation on proposed health cuts at this Monday evening in Enniskillen.

The consultation meeting scheduled for last night, Thursday, was called off after hundreds of people turned out to voice their concerns, but the room booked at the Lakeland Forum in Enniskillen by the Western Trust wasn’t big enough. Instead, the public exited the building and a protest was held outside, where people voiced their anger at the proposals and their fears for the future of SWAH services. The meeting has now been rearranged for the big hall at the Forum this Monday evening, October 2, at 7pm.

Unite the Union representative, Donal O’Cofaigh, said what happened last night was a victory for “people power” and that momentum must now be built upon.

“Remember what we’ve done tonight,” he said. “It was people power that achieved this, and we’ll use people power to stop this in the end. Get thousands out. We want to mobilise the whole county. We’re not letting our hospital go.”

Mr O’Cofaigh added: “The stand of the people of Fermanagh tonight has been and will be remarked upon by the people up the road in Belfast and Derry.

We’ve stood and we’ve showed we’re not going to be fobbed off by a sham consultation where there’s room only for 100 people in a room, where they have it at tables where they control the discussion, and where we will be corralled into making decisions.”

The deadline for the consultation on the proposed £12.5 million cuts is next Thursday, October 5. To read the full list of proposals, or to fill out the online consultation form for those who cannot make the meeting, visit www.westerntrust.hscni.net