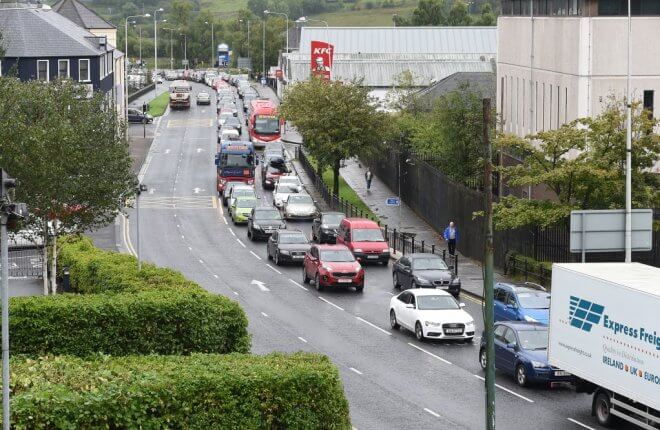 BUSINESS owners on the Sligo Road have hit out angrily at the roads service after they say they needlessly lost out on vital trade this week due to the road works that have caused traffic chaos in the town.
In a situation that is strikingly similar to the Johnston Bridge debacle two years ago, Enniskillen came to a standstill as resurfacing works on the Sligo Road got underway on Monday, with half of the Sligo Road closed, and one lane on the “new bridge” by the Castle closed.
Motorists were stuck in gridlock for up to an hour at times, while local taxi firms have warned of delays and told customers they may have to “double up” as a result of the congestion.
The situation has been particularly frustrating for business owners on the Sligo Road itself, which was eerily free of traffic when the Herald visited on Monday, despite the road not being closed until the point where the road works begin, after Flynn Floors and Craigville Garden Centre.
The business people said customers were being directed away from their shops due to misleading road signs.
“The sign says the Sligo Road is closed,” said Mary Flynn. “The Sligo Road is not closed. There’s nothing happening until after our shop, so they could’ve put them up Coleshill. On the main sign, coming out of the town, its says ‘Sligo Road closed’ so people aren’t actually coming out here.”
Speaking along with Scott Robinson from Craigville Garden Centre, Frankie Rooney from Flame Fireplaces, and David Burleigh from Erne Tackle and Bait, Ms Flynn said each of them had “not seen a customer” since the roadworks began, on a day which would traditionally be one of their busiest.
Mr Rooney said they were also frustrated by lack of communication from the Department of Infrastructure on what was happening.
“We didn’t know anything about it until we saw the sign or read the Herald last week, which is absolutely unforgivable from a government body,” he said. “You can’t just close down a road and not tell anyone.”
Mr Robinson said the situation was not only affecting their businesses, but the reputation of the town: “Where do you get this money back, how do you survive? How do you lose two weeks takings? It’s just chaos on that bridge, absolute chaos. The town has been brought to a standstill again. People are posting on Facebook to stay away from Enniskillen.”
Explaining she each of them had been told by the Department the misleading signs would be changed, but had not been yet, Ms Flynn spoke for all of them when she said: “The main message we want to get out is the Sligo Road is open for business.”