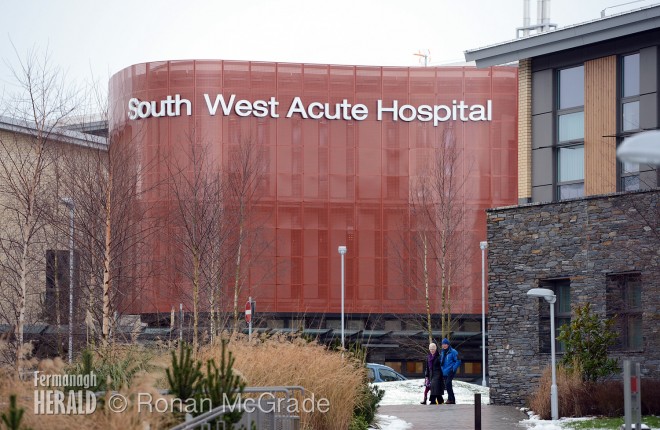 THE FIGHT to save the stroke unit at South West Acute Hospital (SWAH) stepped up a gear this week with a large crowd attending a public meeting in Enniskillen on Monday night.

Stroke survivors, carers, relatives, union reps, health care staff, carers and concerned members of the public packed out the meeting in Enniskillen to discuss the implications of the proposed ‘Reshaping Stroke Service.’
Fears have been mounting over the past year for the future of the world-class stroke unit at SWAH, which is under threat as part of a proposed shake-up of stroke services at Trusts across the North.
The group outlined the issues relating to change and how the current stroke unit would be affected should things change. The public were given an opportunity to air their opinions in an open floor discussion with many of those present talking about how time was of the essence and critical to give stroke patients the best possible chance.
These views will now be presented at the meeting with the HSCB to discuss stroke proposals which will take place today, Wednesday, 9th August at The Tara Centre, Omagh at 2.15pm.
Last month, the Herald reported how a new report has revealed that SWAH’s stroke unit continues to meet the highest standards for patients ahead of other hospitals across the North.
A spokesman for the Fermanagh Stroke Support Group said, “The meeting went really well and there was a huge crowd in attendance. It was agreed to create a small working group to assist the Fermanagh Stroke Support Group in formulating questions to be asked at the forthcoming Local Commissioning Group meeting arranged for today’s meeting.
A Friends of the Stroke Support Group’ was also established as those present very much wanted to be part of a campaign to actively support our excellent stroke unit based in the South West Acute Hospital in Enniskillen.”
The Stroke Group has organised a bus to assist members of the public who wish to travel to the meeting. The bus will leave the Stroke centre at 12.30pm and seats can be booked via the Facebook Page. Those who are concerned and are unable to attend today’s meeting, are urged to return responses to the Health & Social care Board by 5pm on Friday September 15th 2017 or by emailing them to : reshapingstroke@hscni.net or by filling in the on-line questionnaire at www.hscboard.hscni.net/stroke.