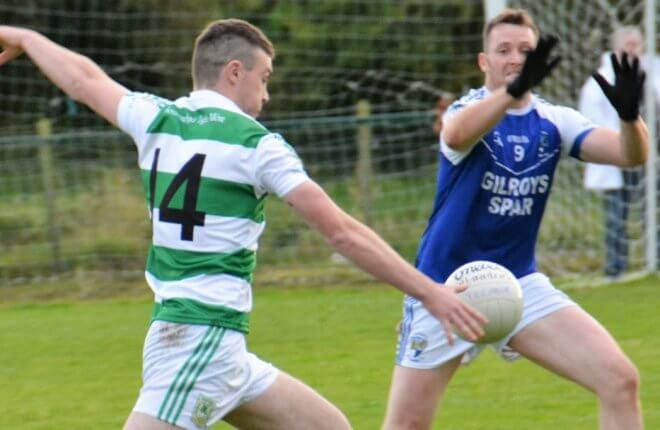 If GAA mandarins are wondering how to structure a championship, they could do worse than take a little trip down to the Lakelands.
Last weekend the Fermanagh championship threw up nine intensely fought games with an average winning margin of just 2.78 points. No Dublin v Tyrone style walkovers down Erne way, that’s for sure.
Two of the sides who will have to go again are Devenish and Teemore following a 0-13 to 1-10 deadlock last Sunday.
Teemore went into the quarter-final at Derrygonnelly as underdogs. However their championship pedigree shone through as they held the edge on more fancied Devenish right down to the dying moments.
In the end the Blues had sweat it out as goalkeeper Thomas Treacy stood up to the last kick of the game, a 47 metre free which had to be converted to keep his side in the championship race.
The county shot-stopper showed nerves of steel as he thumped the ball right over the black spot to the relief of the large Devenish support in Canon Maguire Park.
“Happy with a draw,” was the verdict of Devenish manager Malachy Cullen.
“Two minutes before that we were out, so relief is the main emotion. The only thing I’m happy about is that we never gave in, despite playing very poorly. We were poor and didn’t play anywhere near where we can. We weren’t quick enough to the ball, we weren’t feeding our full forward line quick enough. But we live to fight another day, and that’s the way we look at it.”
One of the key men driving the Teemore challenge was Eoin McManus. McManus has only recently returned to football after an injury on county duty at the start of the season saw him kicking his heels for the best part of six months. Cullen admitted McManus was a bit too hot for Devenish to handle. However he has a few aces up his sleeve to play for Saturday’s replay in Brewster Park.
“He [McManus] is a fine footballer, particularly over the dead ball, and we gave him a few chances, so he was always going to be good for them.
“But we’ll take a bit of heart from the game. Marty [O’Brien] is back next week from suspension, and Anthony [McGuinness] was unavailable and we’ll have him for the next game too. John [O’Flanagan] is only tentatively coming back, you could see that at the end.”
Cullen also had praise for his ice cool keeper.
“To be fair to Thomas, he knows he made a horrendous mistake for their goal, but yet he had the mental strength to come up and kick the equalising score and that shows great composure.”

Meanwhile Teemore boss, Tommy Clarke, was understandably a bit more circumspect following the final whistle.
“I would have taken a draw before the game, but over the hour I think that it’s one that got away,” was the view of the Shamrocks supremo. “But we’ll be up for it in the replay. There’s been three tight game this year between Devenish and Teemore, there’s only a couple of points separating us in the league. It was a draw at half time, a draw at full time. Somebody’s going to have to win it, but we’re confident we’ll have what it takes and we look forward to the replay in that spirit.”
Clarke was also glowing about Eoin McManus’s contribution and is confident the young star has more in the tank.
“That’s Eoin’s first full match this year and that 60 minutes of football will have helped him. He’ll be better next weekend again for it.”