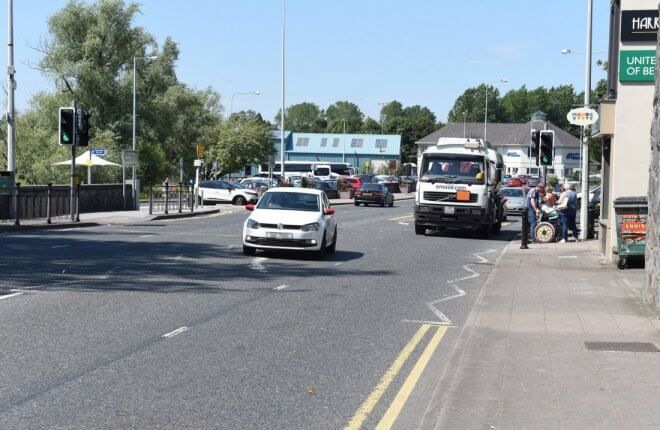 Two lanes merge into one on Wellington Road in Enniskillen

ENNISKILLEN traffic is always an emotive subject, but recently a passionate debate has developed online regarding one particularly confusing stretch of road in the county town.
At the end of Wellington Road, right after the pedestrian traffic lights between Maude’s Cafe and the Erneside footbridge, two lanes merge into one.
While many people believe the outside lane, travelling in the direction of Gaol Square, is a slip road for the public carpark just before the lights on the right-hand side of the road, this is actually a misconception.
Rather than being “cheeky drivers”, who are trying to avoid the queues on this notoriously busy road, the lane is actually there to ease traffic, and is intended for drivers to “merge in turn.”
The debate erupted on a local Facebook page recently when one user posted they were “fed up” with drivers cutting in from the outside lane.
“I have waited in inside lane patiently for other drivers to fly past in outside lane to push past and then proceed to drive their car at me so they can get in,” they said. “It is a slip lane for the carpark next to Erneside.
“I am fed up with people skipping the queue and forcing their way in dangerously and aggressively.”
While many empathised and agreed with the driver, it appears confusion reigns on this road, as others were quick to point out those “skipping the queue” were actually using the road as it was intended.
“It isn’t a slip lane for cars to enter the carpark, it’s a merge in turn lane just like the one outside TP Toppings,” one person explained. “The issue is people don’t know how to use a merge in turn lane about here and just bull on.”
“It is not a slip lane to the carpark,” wrote another. “It is designed to lessen build-up of traffic in left lane and for the right lane of traffic to merge into it. Drivers here don’t know how to use it and then get irate and think you are being cheeky when you try to cut in.”
The Herald contacted the Department of Infrastructure regarding the issue.
A spokesman said: “The Department is unaware of any issues relating to the lane layout and road markings on Wellington Road in the vicinity of the Erne Shopping Centre footbridge.”