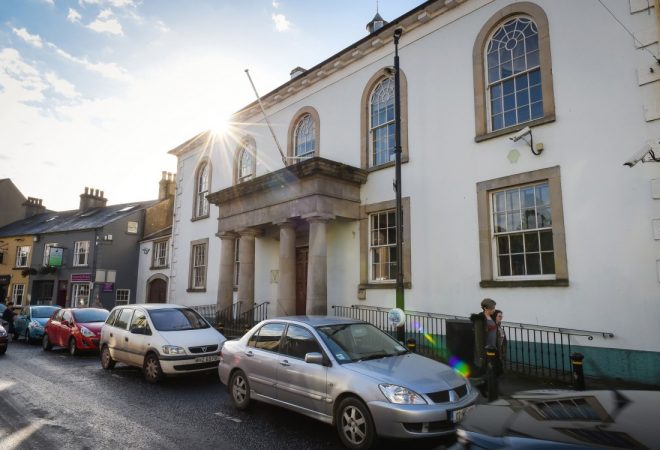 A 24-year-old man has been banned from driving for a year after failing to tell a judge the full story about who was driving his car when he was found to be over the legal drink drive limit.
Marcus Tisdall of Glenview Park in Tempo appeared before Enniskillen Magistrates Court on Monday, charged with being drunk in charge of a vehicle.
The court heard that police were on mobile patrol on Main Street, Lisnaskea at 1.10am on May 28th last when they observed a Volkswagen Bora stopped at the roundabout at Drumhaw. When officers approached the car, they found a number of males inside. Tisdall, who owned the car approached officers to say he hadn’t been driving the car at the time but refused to identify who had been.
After detecting a smell of alcohol, Tisdall failed a preliminary breath test. He was taken to Enniskillen police station where a further evidential breath test returned reading of 40 micrograms of alcohol in 100ml of breath – the legal limit is 35 micrograms. Tisdall declined to give police a blood sample.
Defence solicitor Sean McHugh explained to the court that his client hadn’t refuse to reveal who was driving his car at the time because he wasn’t aware who had been.
“He had travelled to Lisnaskea from Tempo and met a friend. He was aware that there would be some socialising and intended to leave his vehicle behind and collect it the next day. He entrusted the keys to his friend but they later came upon a group of hostile youths and some bottles were thrown.
“He felt that it was better to get out of this situation but his car keys had been entrusted to someone else. He was in the car travelling behind his own and wasn’t aware of who was driving it – there was a certain amount of confusion,” Mr McHugh told the court.
Mr McHugh said his client was a qualified digger driver and despite being currently unemployed, Tisdall was on the lookout for work in the building industry but this was contingent on him retaining his licence.
Addressing Tisdall, district judge Nigel Broderick said while it “wasn’t entirely clear what had happened that night”, the explanation given to his solicitor “doesn’t bear any credibility”.
He added: “This court hasn’t been given the full picture”.
The judge fined Tisdall £250 and disqualified him from driving for 12 months.