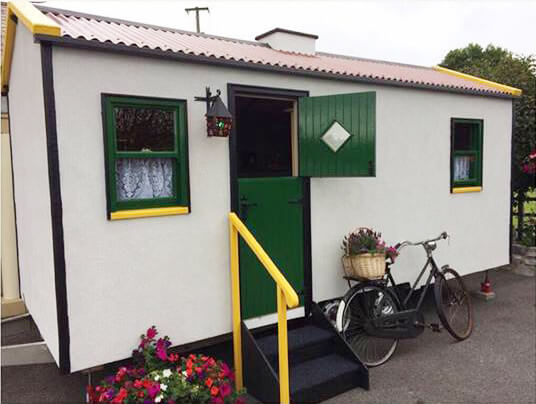 ROSLEA man Jonny McGeough has put his own twist on the traditional Irish pub by taking it on the road – literally.

Jonny is the brainchild behind The Hidden Naggin – a caravan converted into a cottage-style bar on wheels that wouldn’t look out of place on an episode of Father Ted.

After buying a beaten up old caravan off a “few festival lads” and putting in nine months of hard graft, he has now created his boozy beauty.

Jonny explained to the Herald how his unique venture came about: “The caravan had definitely seen too many festivals. It was very much a family affair with everyone chipping in from myself as the brains and my dad Seamus working on the exterior in the evenings while my mum Kathleen provided the interior touches.

Jonny was keen to keep a traditional Irish cottage feel with a John Deere green half door, a realistic open hearth fire, turf by the bar, antique Irish dresser, net curtains, images of Vanishing Ireland, the St Brigid’s Cross on the window and the bicycle by the door.

“I started collecting the decor over recent months from charity shops to give it a real homely feel and I think the end result is pretty cool. Once you enter it’s like stepping back in time from the Paddy cap hanging on the door to the little ornaments on the shelves, the old fashioned Guinness mirror and cosy corner sofa seat.”

With a fully kitted out bar, two taps of Guinness and lager and a fridge, The Hidden Naggin can hold up to 20 people and is available to hire for anniversaries, birthdays, corporate events, festivals and weddings.

Jonny, who works with Concern Worldwide in Dublin, added: “If you provide the drink, I’ll provide the sandwiches and we’ll be ready to rock. The calls are starting to come in so I’m hopeful that this gamble will really pay off.”

He has just returned from Rosscarbery in west Cork where he launched his show stopping transformation at the 40th anniversary of Nolan’s Bar – such was its success that while there, The Hidden Naggin was also the venue for two wedding parties. Its next appearances may include the Harvest Festival in Enniskillen and the Rose of Tralee International Festival.