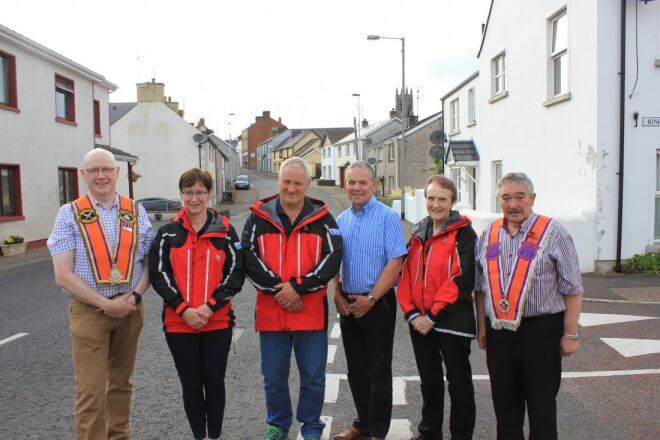 MOTORISTS are being warned of traffic disruption in and around Lisbellaw next Wednesday when the annual Twelfth of July celebration takes place in the village.
The A4 Belfast Road will be closing at 10.15am with traffic travelling from Enniskillen to Belfast being diverted via Tempo, Fintona and the A5. Belfast – Enniskillen bound traffic will be diverted at the Ballygawley roundabout via Omagh.
The Fermanagh Grand Orange Lodge’s links with charities continues at each Twelfth of July celebration and this year’s chosen charity will be the North West Mountain Rescue Team.
Street collectors will be out in force in Lisbellaw on the day on behalf of the organisation, which provides a search and rescue service for the region.
Back in 1998 with the official opening of Cuilcagh Mountain Park, NWMRT saw the need for a rescue team to be set up in the region, with a base in Fermanagh. Local people showed great interest and a permanent section was set up to provide a service in this area.
Situated in the heart of the hills in Florencecourt, it was officially opened in August 2013 by founding member and current team president Uel Hamilton. The base is used for training and an equipment store and is maintained by team members.
Known as the West section, the Fermanagh section comprises 15 operational members, 13 full and two probationary. At present, a new group of inductees are being introduced into the initial stages of their training programme and through time will hopefully progress to full membership.
Stuart Brooker, Fermanagh’s County Grand Master told the Herald: “In recent years, we have moved away from supporting traditional Orange charities in favour of the more mainstream organisations including the Red Cross and RNLI. When we were approached by NWMRT with a view to supporting them this year, we were only too delighted to support their work locally in Fermanagh on behalf of all the community.”