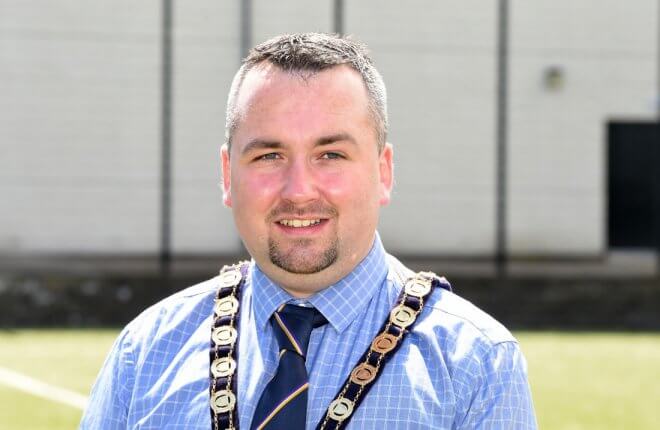 It was an evening of great political drama at Enniskillen Townhall last night, when the last Council meeting of the summer erupted in a row.

Representatives from the UUP, DUP, and the SDLP walked out of last night’s monthly meeting of Fermanagh and Omagh District Council over chairman, Stephen McCann’s refusal to apologise for controversial remarks he made about the Enniskillen bombing.
At the beginning of the meeting, representatives from the three parties called on him to apologise
with UUP Councillor Howard Thornton leading the proposal saying, ‘I propose that you publicly and unreservedly apologise and retract your recent remarks.’ He also added, ‘you have brought shame and disgrace to the office you hold and untold hurt to communities and victims you are meant to represent as chairman of this council.’
The newly appointed chairman said he ‘would quite willing give them a hearing, but he would talk about it under Any Other Business’ at the end of the meeting agenda.
With less than ten minutes gone, the meeting continued with the agenda with just Sinn Fein and Independent Councillors remaining in the chamber.
In the Any Other Business section of the agenda, Chairman McCann said “It is a matter of regret that they have not availed of the opportunity to discuss the matter at hand.”
McCann referred to the contested history of the district, and acknowledged the hurt and loss on both sides saying, “I recognise that we also have a contested history and different narratives on the past. I want to play my part in building a better society for all, based on justice, peace and reconciliation. I want to take the opportunity to reaffirm that I will do my utmost to be impartial going forward and I will continue to be a Chair for all.”