Advertisement
HomeNewsLocomotive may be permanent feature at the Buttermarket
Advertisement 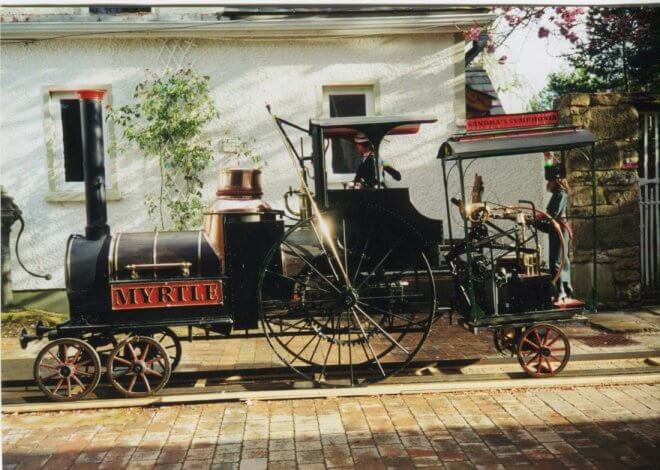 THE romance of the railways could soon be returning to Fermanagh after all, thanks to the genius of a late local school teacher and the generosity of his family.
Last week the Herald spoke with train experts Selwyn Johnston and Sam Somerville about the, sadly unlikely, prospect of the rail network returning to Fermanagh. Mr Somerville cited high costs and extreme disruption as reasons the project wouldn’t happen, while Mr Johnston wasn’t overly optimistic either, at least not in the short term.
However, it turns out there could be a (train) light on the horizon, thanks to the late great Gordon Johnson – artist, modelmaker, teacher and “magical imagineer” – and his stunning creation, Myrtle the steam engine.
“After a protracted series of meetings with the Council, it is possible that Enniskillen will at last have its own locomotive,” said Mr Johnson’s wife Toni, who is passionate about the train being enjoyed by everyone in Enniskillen, as Gordon had wished.
“Not exactly a ‘new generation train’ but beautiful and majestic Myrtle may soon take up her place in the Buttermarket, the centre of the town. She may not take us far, but we can look at her and be reminded of those trips to Bundoran, and on the hour her driver and co-driver will start her up with a modest blast on her whistle and a rush of steam.”
Described by Toni, in Gordon’s words, as “a piece of kinetic art”, Mytrle and her fully-functioning engine is made entirely from reclaimed and repurposed materials, including a copper boiler, an old barrel, brass bedknobs, and “all sorts of things.” Toni pointed out those who look carefully may even recognise the driver and musician, who are modelled on a couple of Gordon’s past pupils at the Collegiate.
Gordon Johnson moved to Enniskillen with his family in the early 1960s, and is well known for his model creations, writings and unique art. He has scores of models in museums across  Ireland, the UK, and even the US, such the Ulster Transport Museum, where he has 26 pieces, and the Fermanagh County Museum where his shop has been beautifully recreated thanks to donations from Toni and their four children.
If and when she is put on display at the Buttermarket, having been kindly gifted to Enniskillen by the Johnson family, Myrtle will be the first piece of public Gordon Johnson art on display anywhere.
“Watch out for her,” said Toni. “It’s taking a while but I think it will be worth it.”