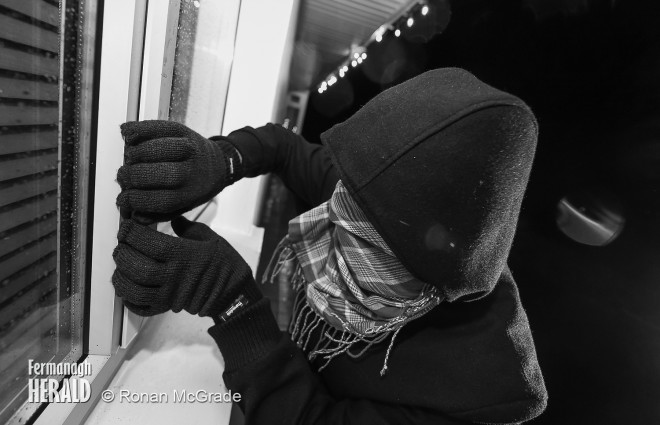 There have been a number of burglaries locally.

A NUMBER of Enniskillen residents have fallen victim to a spate of crime as houses in the Cornagrade area have been targeted by burglars.
The burglaries occurred in houses at Glenwood Gardens, Kilmacormack Drive and Riverside between the late evening of Monday 12th and the morning of Tuesday June 13th. It is reported that jewellery and electronic equipment were stolen, and that all three incidents may be linked. The houses were all vacant at the time of the burglaries.
Devenish Partnership Forum which is an umbrella body for four community associations for four estates within Enniskillen are aware of the incidents in the area. A spokesman has advised residents to be mindful when using social media, while their house is empty.
“These burglaries seems to be happening to people who have been away from their homes, so do not be posting on Facebook when you are going away on holidays, or when your house is going to be empty. Make your neighbours aware that you are going to be away so they can keep an eye on your property. These incidents have been happening in other areas – not just our area, so everyone should be vigilant.”
Local Councillor Keith Elliott is alarmed by the increasing number of burglaries in the area, and has branded the crimes as ‘unacceptable.’
‘The recent spate of burglaries in the Cornagrade area are at an unacceptable level and urgent action must be taken to remove this scourge from society. This is a quiet and peaceful area of Enniskillen where people enjoy a strong sense of community spirit. I have liaised with the PSNI to establish the nature of these incidents and I would call on members of the public to work together and report anything suspicious,’ said cllr Elliott.
PSNI are currently investigating the burglaries and released a statement saying,
“ Police in Enniskillen are currently investigating three burglaries that occurred at houses in Enniskillen between the late evening of Monday 12th and the morning of Tuesday June 13th. Police are investigating a link between the incidents. Officers are appealing for anyone who noticed any suspicious activity in any of these areas on between late Monday evening Tuesday to contact them at Enniskillen on 101 or Crimestoppers anonymously on 0800 555 111.”