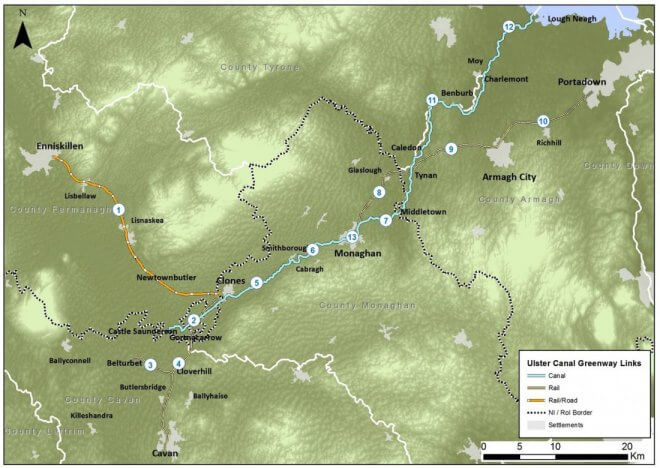 The Ulster Canal Greenway will involve a new tourist trail from Clones to Enniskillen.

FERMANAGH could be in for a tourist bonanza in the coming years, with plans to open a greenway connecting Monaghan and Fermanagh.
It is hoped the Ulster Canal Greenway, set to be completed by 2020, will replicate the phenomenal success of a similar project in Mayo.
Running from Middletown in Armagh to Smithboro in Monaghan along the route of the old Ulster Canal, there will a connecting 34km trail from Clones to Enniskillen, via Newtownbutler and Lisnaskea, running along disused railway lines and public roads.
The €4.95 million project is being developed by Waterways Ireland, with partners in various councils along the route. North regional manager with Waterways Ireland, Joe Gillespie, said its aim was to create a sustainable transport alternative for cross-border commuters and to provide a recreational tail for walkers and cyclists for both locals and tourists.
“The success of the Great Western Greenway in Co Mayo for commuters and tourists alike provides a model on which a greenway for the Ulster Canal can be based,” said Mr Gillespie, who said the project would fit well with their current plans for Lough Erne.
A public consultation has already been held in Newtownbutler regarding the project, which is being funded by the EU as well as the Department of Transport in the South and the Department of Infrastructure in the North.
It has also been suggested that a cross-border greenway from Enniskillen to Manorhamliton, and potentially on to Sligo, however this is not included in the current project.