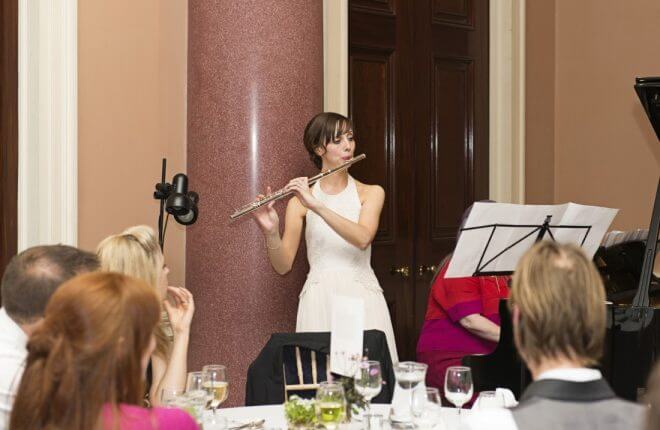 THE Proms may be coming to Fermanagh for the first time this autumn, but there’s been a local link to the internationally acclaimed live music event for years now.
Una-Frances Clarke from Enniskillen works as part of the publications team for the Proms, which involves working on the BBC Proms Guide, all of the printed programmes for the Proms concerts throughout the summer, and any other BBC orchestra and choir events throughout  the rest of the year.
Being London based, Ms Clarke was not involved in the decision to chose Castle Coole as this year’s location for the Northern Ireland location for the Last Night at the Proms, but said she was obviously delighted with the choice.
“I was thrilled when I heard that Castle Coole had been chosen as this year’s Northern Ireland venue. It is such a beautiful setting and I’m particularly fond of it since I had my own wedding reception there in June 2015,” she said.
“Lord Belmore has always supported music and the arts, when I was still at school he awarded me the Viola Westminster Bursary, which helped fund my instrumental studies at the Royal Irish Academy of Music.”
Ms Clarke has been interested in music from as long as she could remember, and comes from a very musical family on her mum’s side, the Sloweys from Roslea.
All through schools she sang in choirs, competed in the Fermanagh Feis, and was even Enniskillen Young Musician of the Year in 1999. She attended piano lessons with Helen Hamill while at school in Mount Lourdes, had flute lessons with Don Swain, and was the WELB Senior Youth Orchestra.
“After finishing a degree in music at UCD, I actually returned to Fermanagh as a peripatetic woodwind tutor for the WELB Music Service for a year, before returning to student life and taking my master’s degree in music at King’s College London,” she said.
“I’ve been working at the BBC Proms since 2011, having completed my PhD in music that year.”
Ms Clarke added: “One of my favourite things about the Proms is that it appeals to so many people. Whether you like orchestral or choral music, opera, jazz, big band or film soundtracks, or making new discoveries, there’s something for you.
“And, since all of this is encapsulated in the Last Night spirit, I have no doubt that the Proms in the Park audience will receive a very warm Fermanagh welcome in September.”