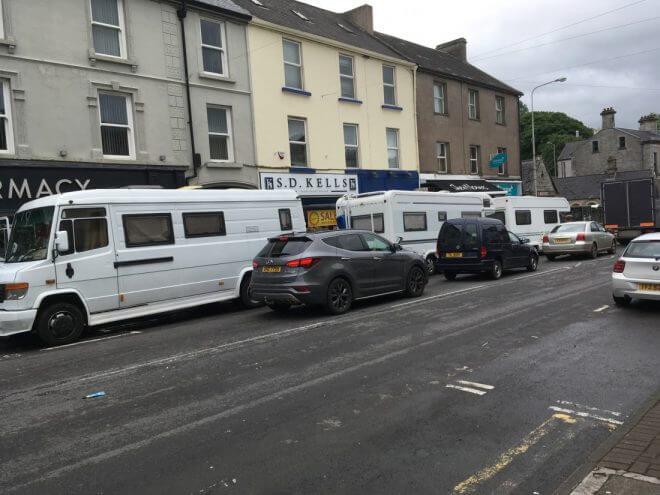 Some of the motorhomes that were part of the Traveller convoy in Lisnaskea this week.

LISNASKEA residents have spoken of their concerns as a convoy of vehicles with Traveller families stopped overnight in the town on Monday evening.
Motor homes and campers vans lined the length of the Main Street, causing disruption to businesses and local residents. They were also parked in the town’s carparks, and around the site of the Tuesday market in the town.
One business owner said, “There were a lot of vans and mobile homes parked up. In one of the carparks there were six vans and when I was coming into town on Tuesday morning, they were parked right up to the top of the main street, on both sides of the road.
“This happens quite often here, and we believe that there was a Traveller wedding in town last night.”
On Tuesday morning, residents reported that a tree had fallen, and there was vomit on the benches on the Main Street. Another local resident has said that the mobile homes had been parked overnight from Monday night until Tuesday afternoon and has called for the return of traffic wardens.
“You cannot have motor homes filling up both sides of the Main Street. I would like to see the traffic wardens back to shift them all. When I was coming in to work at 9am on Tuesday morning they had the street lined on both sides so customers would not have been able to get in,” said another resident.
It was also reported that due to the disruption motorists faced long delays, back to the Brookeborough Road roundabout end of Lisnaskea.
“We do not mind them being here peacefully, but they have been causing quite a disruption! They just camped up for the night and were parked the whole length of the street,” complained another resident.