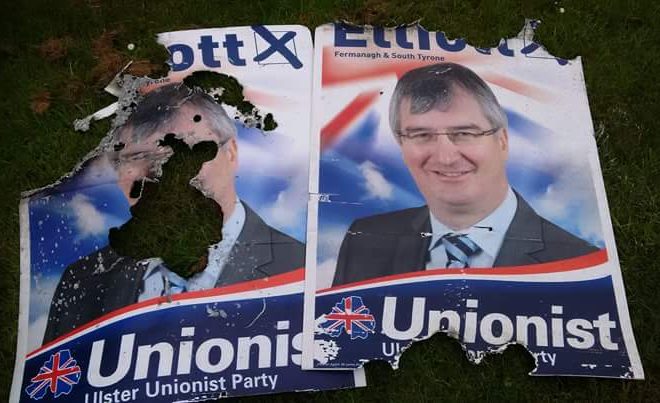 Unionists in Fermanagh South Tyrone have hit out at those responsible for the removal and burning of election posters belonging to their Westminster candidate Tom Elliott.

It’s believed the incident in which the posters near Enniskillen were torn down and set alight occurred in the early hours of this morning.

Mr Elliott earlier tweeted to say he was “saddened” by the move.

A spokesman for the Fermanagh South Tyrone Ulster Unionist Party said: “This disgraceful behaviour does not prove or achieve anything. Those responsible should take a long, hard look at themselves.

“The people of Fermanagh and South Tyrone along with #TeamElliott will not be intimidated or deterred from delivering our positive message to the electorate.”

Sitting MP Mr Elliott is currently battling to retain his seat in the House of Commons which he snatched from Sinn Féin’s Michelle Gildernew two years ago. Mr Elliott officially launched his re-election bid for the June 8th vote at an event in Enniskillen yesterday while today it’s the turn of Ms Gildernew whose campaign launch takes place in the Manor House Hotel at 4pm.