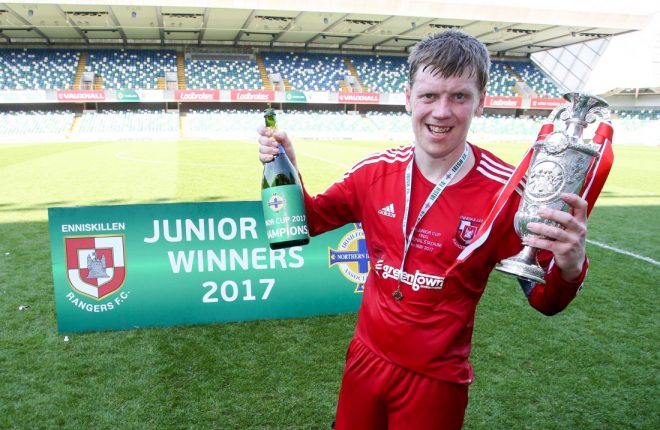 Carlsberg don’t do Junior Cup finals, but if they did it would probably work out like Willie Burleigh’s.
Eleven years after winning the Harry Cavan Youth Cup with Enniskillen Rangers, Burleigh got his hands on the greatest prize in Northern Ireland junior football as club captain.
The Benaughlin sheep farmer led his team out at Windsor Park on the May Day bank holiday, opened the scoring, grabbed another goal before half-time and lifted the Junior Cup trophy at the end of it all for his team. For good measure he walked off with the man of the match award too.
“It’s the highlight of my career by a mile,” beamed the jubilant Burleigh. “I couldn’t be happier, you couldn’t write that.”
The all-action central midfielder covered every blade of grass at Windsor Park and opened the scoring 19 minutes in with a textbook touch and finish in behind the Hill Street defence.
“We got the first goal to help settle us then got the second one soon enough after that and a few more before half-time so it just went great for us. We were relaxed and confident before the game and we are just delighted.”
Burleigh, 29, is certainly a player who does his talking on the pitch but he’s not afraid to set the bar even higher for his Ball Range team-mates next season. Remarkably it will be a decade on from his first full year with the club which they spent in division three of the Fermanagh and Western.
“I suppose all we can do after this is to come back up next year and win it again. We want to win the league again, but we will enjoy this one first,” said Burleigh.