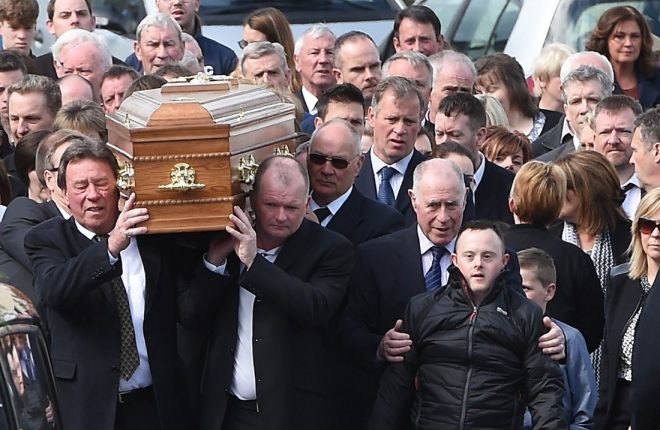 A priest at the funeral of Connie Leonard today paid tribute to her son brave son Conor for protecting his mother and seeking help in what was “a moment of madness”.
Four days after her brutal killing by her former partner Peadar Phair in a shocking murder-suicide at her home in Maguiresbridge, her funeral mass was held at St Mary’s Church in Brookeborough this morning. Conor Leonard, who is in his 30s and has Down’s Syndrome, sustained stab wounds to the stomach while defending his mother against her attacker, who took his own life. He was released from the South West Acute Hospital yesterday (Thursday) in time for his mother’s funeral. A private funeral for Peadar Phair took place in Lisnaskea yesterday.
In his homily at Ms Leonard’s funeral, Fr Brendan Gallagher PP said the past few days have been a great challenge to the faith of both her family and the wider community.
He told mourners: “On Monday afternoon in the light of a Mayday evil intent visited this peaceful community. Evil lurking in the shadow, seeking to destroy life. But in that moment of madness, Conor cared for and protected his mum. We see him holding her hand to reassure her and we see him finding the courage and confidence to seek help.
“That is the reality, the horror of evil intent. But since that time, this family, this community have stood in the light, to confront, to overcome the dark shadows that seek to destroy life. Circumstances could have been different. Many people experience and express feelings of regret. If I had been there to protect. If I had done something differently!”
Fr Gallagher also paid tribute to Connie’s many “beautiful gifts” and in particular for bringing so many young people into the love of the traditional music and culture.
“Whether it was here in Brookeborough, or Donagh or Lisnaskea. All over the county and beyond. With her energy and enthusiasm, her infectious smile and the twinkle in her eye, she has left a legacy of musical talent for generations to come.”
Acknowledging her devotion to her son Conor, the priest said the pair had “shared a special bond of love”.
“Conor was at the heart of everything in her life and together they developed friendships and lived experiences that most of us could only dream about. Conor is our future and our reason to hope. Thankfully he survived the ordeal of Monday, because he is the one who will lead us all on the journey of recovery. His love and his affection will be a source of healing for all, he is the light that will renew the spirit of hope in our lives,” Fr Gallagher added.