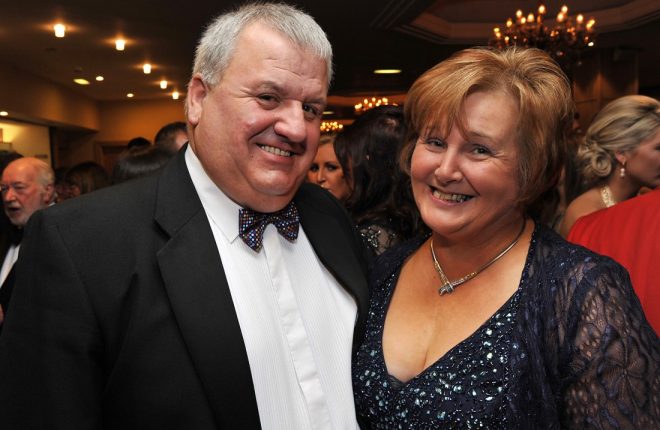 HUNDREDS of mourners bid a fond farewell to popular Fermanagh businessman Ivan Bradshaw at his funeral yesterday (Tuesday).
There was widespread shock in Lisnarick this week following the death of the father-of-three in a freak accident on Friday evening. Mr Bradshaw had been cutting the grass in the grounds of his Drumhoney Caravan Park when he died of natural causes before the lawnmower he was riding at the time tumbled on top of him. Emergency crews who rushed to the horrific scene were unable to save him and he was pronounced dead at the scene.
Chairman of Lisnarick Football Club, Steven Ormsby said the “devastating loss marked a very sad day for the village of Lisnarick and beyond”.
Mr Bradshaw (60) is survived by his wife Evelyn, three sons Jonathan, Stuart and Peter, daughters-in-law of Kirsty, Edel, Gayle and grandchildren Luke, Naomi and Lexie. He was laid to rest in Sydare Cemetery yesterday afternoon following his Funeral Service in the Priory Church, Killadeas.
Ivan’s son, Peter Bradshaw this week paid tribute to his father’s “massive personality” and described him as someone “who can never be replaced”.
“My father lived a colourful life and he lived it to the full. He will be greatly missed as a businessman, a community and charity activist, but most of all as a husband, a father, a grandfather, a son and a brother.
“He encountered many difficulties and problems that would have put other people off, but he just persevered and nothing and no one would ever stop him,” he said.
Tom Elliott MP said this week that Mr Bradshaw’s untimely death meant that Fermanagh had lost “a great community advocate” while many had also lost “a really good friend”.
He added: “Ivan was large as life and very supportive of the local community as well as a successful businessman who was very well regarded.”
Fermanagh and South Tyrone UUP MLA Rosemary Barton expressed her “profound sadness and shock” following the death of extremely popular businessman, who had spearheaded many new developments within Holiday Park Tourism.
“Ivan was a big man with an even bigger personality. He gave of his time generously in raising much needed funds whether for local causes or national charities,” she added.
DUP Cllr Raymond Farrell also spoke of his deep sadness: “Ivan was a visionary in terms of business and providing a service for visitors to the area. Above it all he was a much loved husband, father and loyal friend. We are the poorer for his passing.”