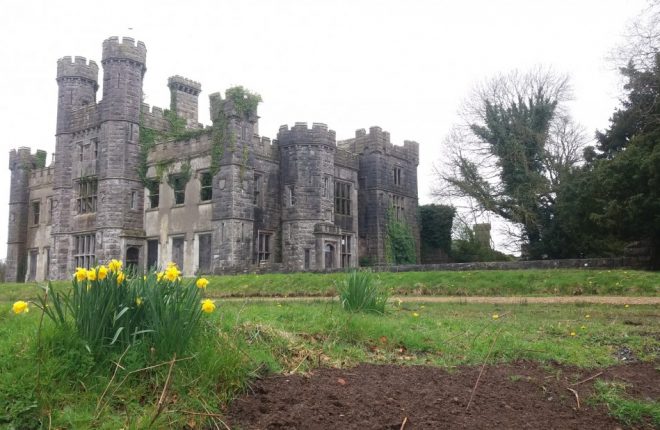 Castle Saunderson, on the border of Cavan and Fermanagh, has been at the centre of many important events in Irish history.

FORGED in ‘fire and blood’, the journey of Castle Saunderson from conflict to international peace centre over the past few centuries tells the story of Ireland.
It is a story Cavan County Council has painstakingly preserved and presented in its new Castle Trail at the demesne, which is located right on the border between Fermanagh and Cavan, just a few miles from Newtownbutler.
Recently launched, at a joint event which coincided with the launch of the Cavan Walking Festival, the trail has seen the original paths around the castle reinstated and the erection of several information panels telling the history of the building and the people who lived there, including Colonel Edward Saunderson, known as the ‘Hero of the Loyalists’ and the founder of modern Irish Unionism.
“The story of Castle Saunderson is marked by fire and blood, conquest and division, and, finally, peace, reconciliation and multi-culturalism, with an international scouting centre opening adjacent to the castle in 2012,” said Conor Harrington from Cavan County Council, who carried a lot of the historical research.
“In many ways, the story of Castle Saunderson is reflective of the story of the island of Ireland.”
Speaking at the launch of the Castle Trail at the International Scout Centre recently, which is also located on site, Cavan cathaoirleach Cllr Fergal Curtin said the story of the castle told in the panels “tells the story of Ireland.”
He said: “Starting off as O’Reilly land before the arrival of planters from across the water, centuries of conflict and division followed before the onset of peace, and the building we are here today, an international peace centre, is a testament to that lasting peace, what can be accomplished despite seemingly insurmountable differences.”
Chief executive of Cavan County Council, Tommy Ryan, said the number of times Castle Saunderson had been burnt down by fire through the centuries showed a troubled and not-so-distant past, with the most recent devastating fire having been in 1990.
“The trail focuses on the history of the castle, through the plantation, through all the conflict, through division, and eventually through peaceful co-existence. That mirrors the journey that Ireland has taken as an island,” said Mr Ryan.
“Cavan is actually achieving a reputation, I think, as a unique place to look at conflict, and look at peace, and look at how we moved on.”
The Castle Trail is now open, while the Cavan Walking Festival begins today Friday, April 28, and runs until May 5.