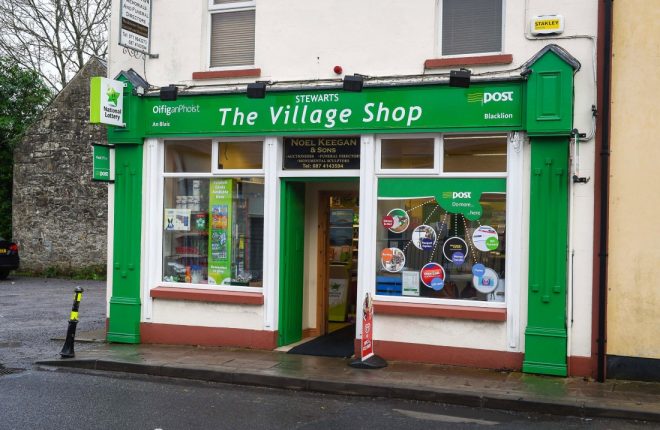 The community in Blacklion has been left in limbo after the indefinite closure of their local Post Office.

An Post announced the temporary closure, which happened on Thursday last, pending a final formal decision on the post office’s future.
News that the village postmistress Dymphna Stewart, was stepping down from her role this year due to the implications of Brexit came as a blow to the small Cavan community. Ms Stewart said that the volume of business in the busy store-cum-post office had halved since the EU referendum last June due to fluctuations in the value of sterling. She was due to finish up on February 14th after ten years but served an additional six weeks beyond her notice period.
An Post carried out a consultation period in December and assessment based on network coverage needs, the level of business at the office, customer access to nearby services and the capacity of neighbouring offices to handle business if the post office closed.
The next nearest post office services are both seven miles away with Royal Mail in Belcoo or An Post in Glenfarne, Co. Leitrim.
Cavan-based Fianna Fail Councillor, John Paul Feeley told the Herald there is uncertainty around if and when the service will be restored:
“Last Thursday was a bad day for Blacklion and one that will be replicated in many rural communities. It is now long past time for action to make our post office network viable and for action from Government. The one thing that is clear is that communities across Ireland, like Blacklion are suffering as the government departments fail to act.”
He added: “Our Postmistress, Dympna Stewart served the community exceptionally well over the past number of years, having worked to restore a service previously disrupted by criminal damage to the previous premises. Her work is greatly appreciated by the entire community. However, this service is now gone and we have no indication as to when it will return, if ever.”