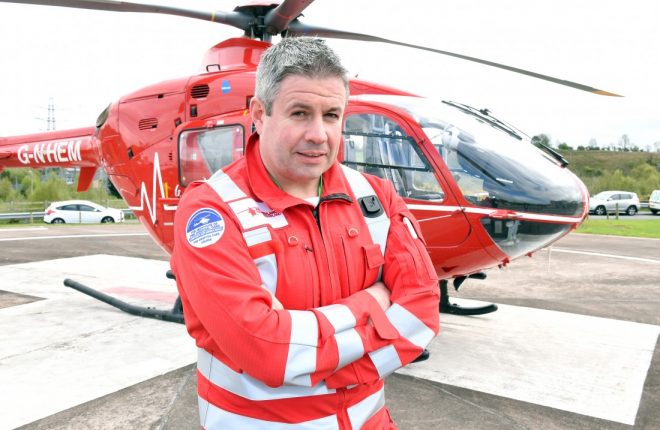 After years of campaigning Air Ambulance Northern Ireland (AANI) has finally arrived at its base in Enniskillen.
The EC135 helicopter has taken up residence at its new home at St Angelo Airport. The service will be doctor led, operating seven days a week for up to 12 hours a day during daylight.
The primary Helicopter Emergency Medical Service will be based at the Maze/Long Kesh site in Co Antrim, providing the main service, while the secondary helicopter will be kept on stand-by to ensure minimum down time.
AANI medics paid a flying visit to the South West Acute Hospital on Monday as part of a training exercise ahead of the service becoming fully operational in a few weeks time.
The creation of a specialist helicopter service manned by a physician and paramedic and capable of giving advanced care en route to hospital, was first mooted by the late Dr John Hinds, who died aged 35 in July 2015, after a motorbike accident in Dublin.
Northern Ireland was previously the only area in the UK without such a service, which will cost around £2 million a year to run.
Local trustee of the Northern Ireland Air Ambulance, Rodney Connor says the doctor led service will save between 18 and 30 lives each year.
He told the Herald: “We have achieved our objective of having a HEMS in Northern Ireland and after four years that is now being provided for the whole of the province. The medical outcome for up to 300 patients will be vastly improved as a result and who will be treated as quick as possible. Through our work as a charity in conjunction with the Department of Health, we have been able to provide the helicopter, pilot, maintenance and base while the Northern Ireland Ambulance Service will fund the doctors, paramedics and medical equipment. We must raise an estimated £1.8m every year to keep the service up and running and provide people with this specialist treatment.”
HEMS Clinical Lead is Dr Darren Monaghan, a consultant in emergency medicine at the Ulster Hospital.
“The service will be of huge benefit to rural communities like Fermanagh in terms of delivering a primary trauma response. Seriously injured patients requiring life-saving intervention will have the benefit of a doctor and paramedic team on site in the shortest time possible for their onward journey to hospital,” he added.