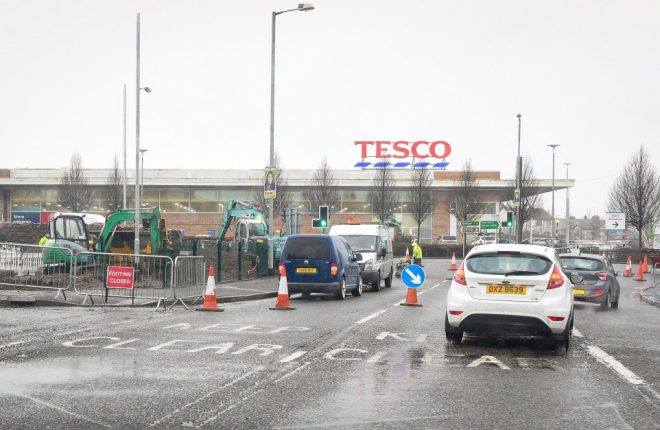 Roadworks near Tesco in Enniskillen.

ROADWORKS on the Dublin Road, Enniskillen outside Tesco, have been proving a nightmare for motorists.
Motorists have been left frustrated when with tailbacks up to three miles long, stretching from the Model School as far out as Tamlaght.
One angry motorist who was in the traffic jam told The Herald, “The traffic was an absolute disgrace. I was coming into town for an important appointment and I was half an hour late because of the tailbacks. The traffic was at a standstill, and it was hugely inconvenient for anyone in the area. I have heard a lot of people complaining about the delays.”
Other motorists who took to social media to express their anger claimed ‘stuck in traffic for 50 minutes to get into Enniskillen.’
And there is further bad news for motorists as the works are set to continue for the next two months.
A spokesperson for Transport NI said, “The large scale road improvement scheme being undertaken at Dublin Road, Enniskillen is expected to be completed within the next two months. The Department for Infrastructure are aware of some traffic delays occurring last Wednesday, due to reduced traffic lanes at the site.
“A full Traffic Management review of this occurrence will be undertaken later this week with the contractor, to ensure any traffic delays are kept to a minimum during the remainder of this scheme.”